With all that has been going on over the last few months, we have been a bit remiss in posting updates on the Hetzer.

Below are some photographs - we expect to be shipping early in the new year.

And the solidworks version:

I'm sure these will be addressed as progress is made.
Best regards,
Bob
Top

It all looks very tempting.

Counting the rivets I feel that 16 rivets would also suit the road wheel well if you do not want to provide 32 of the early versions.


The roadwheels in the photo have no suspension installed yet - i.e none of the leaf springs are in place. There is room for the rubber tyres, and they are on their way.

The rubber tyres are held on with Loctite 480 - this is a rubberised glue that has excellent rubber/metal bonding properties). This glue is so strong that once set, if you try to remove the tyre without a bit of prep, the rubber will rip.
Armortek
Top

Thanks for reply AT,
I was hoping the tires for Hetzer could be held on with mechanical means vs adhesive only. A simple bead lock (from behind) or groove in tire that mates with groove in wheel would be nice. That does make mfg more difficult and more parts.

I actually had a heck of a mess with my E8 tires and 480. The stuff is more viscous than water and just ran everywhere - even using a tiny .008" syringe tip. I've found a better technique (including gloves!

) for installing the tires but its still very unforgiving. Once tire is placed, if not positioned 100% within seconds you're done - its stuck. I have several tires that have pronounced wobble because the 480 initially acted as a lube causing the tire to slide on too far and too easily, but then it sticks almost instantly. 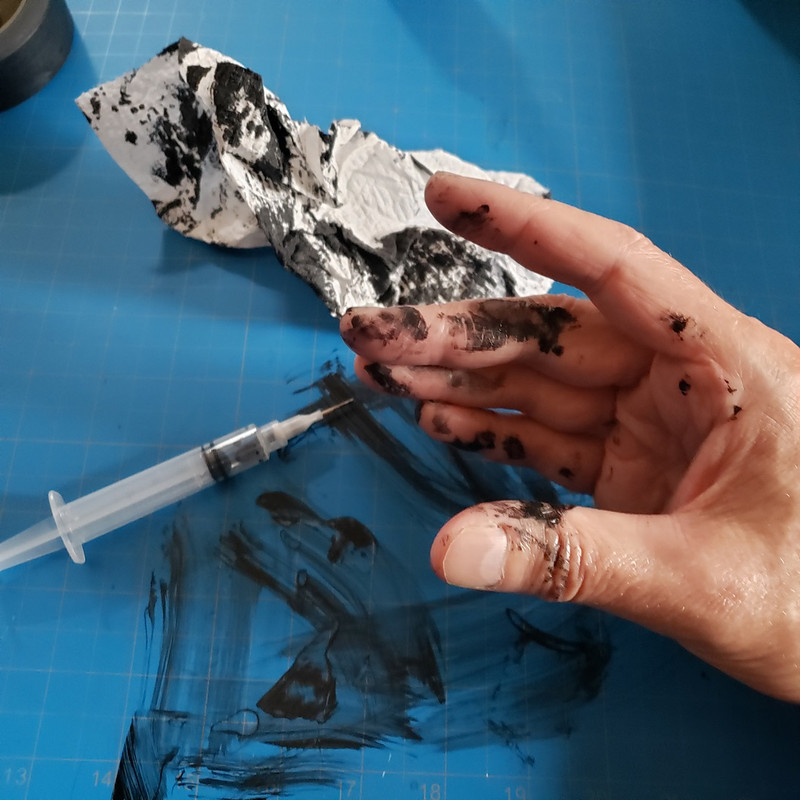 Is there a way to de-bond the tire without destroying it? Perhaps we can have a best practice tutorial for placing the wheels with the 480?

Seems like it should intuitive but took me several experiments to get a technique that didn't make a huge mess.

Bob There is no easy way with the 480, rehearsal, practise and luck, i still have some on my fingers from yesterday, very good stuff though, i use it on lots of applications, regards simon.
Top

Can I just say - rubber gloves

I placed the 480 on the wheel. Wearing gloves I smeared it all around the wheel until there was an even coating all the way around. I put a tiny extra bead on the top edge of the wheel before placing it flat piece of wood (so there was some extra to smear down as the tire goes on). Placed the tyre perched on the wheel and pushed straight down at a slowish pace, so the 480 spread further, until the tyre hit the dead stop of the wood. In the E8's case it was front face of the wheel down since that was the datum edge. Then clamped. I wore gloves and wiped the excess 480 off the wood side of the wheel with them.
Top

Hi All
I have to say I am with Bob on this on it would be beneficial to have a small lip on the back of the wheel to push
the tire up to when gluing.

I had issues with lining up the tires on the Famo.