Totem Pole and the Sundance kid

Difficult to know at the moment Gerhard. I've not run the motors under load.

Howdy Cow punchers!
The Spring washers turned up the other day, so I've had a play around with the shims today, now I can fit the new spring washer in the place I'd rather have them.

I couldn't get the spring washers I wanted, 22mm id x 15mm od x 0.3mm became unavailable, so had to make do with 21mm od x 14mm id x 0.3mm, having to grind out a little off the id. Took about two minutes with a Dremel type hand grinder, genitally taking a little off the internal diameter at a time.

The dynamic has changed a little, measuring up the crown gear a little more accurately, finding it closer to 1.5mm tooth depth. Thoroughly cleaning the old grease out of the gearbox, it was important to make sure the bearings were seated properly, since small differences could cause an inaccurate setup.

During setup I ran the motors on 6 volts to makes sure the high voltage didn't obscure gearbox noise. I'm sticking with the 1mm shim previously used with a 0.1mm shim in front of the spring washer. See picture.

All seems well now and feel that they are both gearboxes are as good as each other, after packing with grease I measured a tooth mesh depth came out at around 1.25mm to 1.30mm. Both gearboxes are smooth and quiet in forward drive a little noisier in reverse but not much.

The benefits are that the spring now spins with the shaft, bearing and gear, The bearings are now fixed in position and I think I've maximized the potential of the gearbox.

I can now move on to setting up the extension shaft alignment and the measuring of the spacers which incorporate the extra support bearings.

What is interesting you can actually see the physical differences I've made to increase the internal surface contact of the gear teeth by the movement of the shafts. Originally they were virtually identical almost flush with the gearbox bearing housing, now there is a marked difference, the good thing there is still a axial float, but not very much now and almost no rotation backlash.

well, I hoped to see a simple nameplate like it is on the older motors: 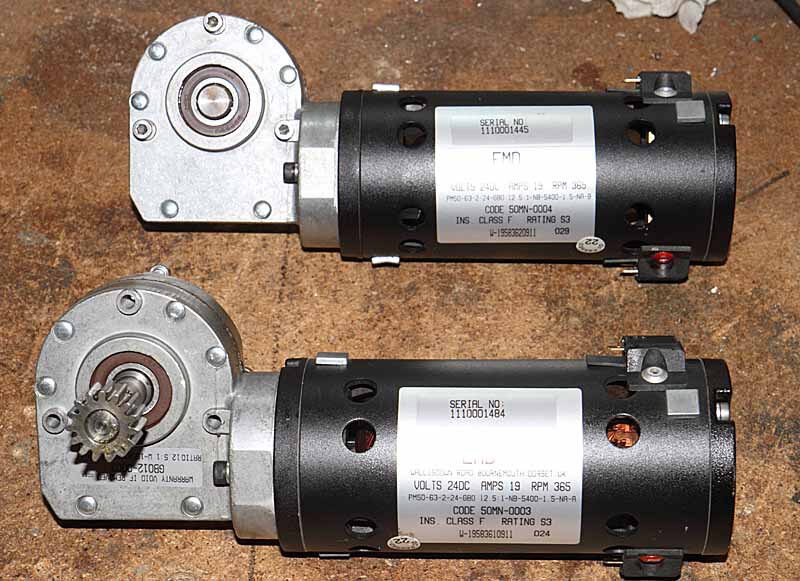 Sorry Gerhard,
Just a label that states what the time the motors were made.
10.2

Time to squeeze some bluetack, as described earlier I want to find out how much of the extended pinon shaft sits in the outboard 5mm deep bushed gearbox housing.
So I've used this simple test, shown in pictures below.
The first Gearbox is the left hand side, where the shaft was shimmed outwards by 1mm.


Originally the extended pinon would have been sitting in the bush about 2.5mm deep, with the shim fitted in the gearbox I now have 3.5mm of the shaft into the bush. I want more.
I'll machine at least 0.5 mm off the motor gearbox mounting spacer so that I'll have at least 4mm of pinon shaft into the bush.

The right hand motor gearbox should be more fun, the shimming on that gearbox moved the shaft in the opposite direction.
Oh Man, I only ride em I don't know what makes them work,
Definatley an Anti-Social type
Top

thanks for reply. In better times the nameplates were some more informative...........

John I'm new to Armortek models so this may sound as an odd question. Under reasonably normal operation do these motors or rather the gear drive part get warm? Just a bit warm or noticeably hot? Reason for asking is many bearing components have a temperature at which their operation is optimal. Is anything of the sort in play here? Is there any risk in decreasing clearances to minimums? Apologies if this has been addressed elsewhere.

A guide only without technical measuring equipment.
Unless designed for, If it's too hot to touch there's usually something wrong.

I'm closing the tolerances on my gearboxes because I want maximum efficiency from the components, It's a heavy model with steel and rubber tracks and I expect it to have pushed Armortek's motion equipment to the limit. I have made allowances for expansion where necessary, but expansion rates are not excessive as long as excessive temperatures are not experienced.

Generally speaking electro mechanical stuff should run around warm to the touch, 20'c to 45'c on the outer casing depending in ambient conditions. Under heavy loading this obviously changes, things can get hot.

The temperature on outer casing is just a guide on whats going on inside, which will be a bit warmer inside, once the temperatures get into the 180'c to 200'c range, winding insulation will deteriorate and short out.

Ordinary ball race bearing grease starts to deteriorate from around 70'c, prolonged use at this temperature and higher it'll be knackered.

Hopefully I'm building in reliability, I sure if it all goes south though, I'll have great post to send

The motors on my T-34 get hot to the touch after extended running but most of them are Summer events and usually done on hot days.

There doesn't seem to be any change in performance from start to finish.

I assumed the motors themselves would become warm at least- you don't get power for free. I was more concerned with the
gear head itself and John has rather handily explained how his work on them shouldn't cause any reasons for concern there.

I've recently acquired an M3 kit which I've begun work on and eyeing the gear motors with these modifications in mind.

Down the road are both the King and Jagd Tigers which I'd like to make as efficient as possible..

Hi Jerry
I must say after shimming the gearboxes I will need the use of a lathe, to make sure both output shafts are the same length when they are present in the models outboard gearboxes.
I'll be removing a little off the motor gearbox spacers, 0.5mm off one and 2.5mm off the other. That will give me at least 4mm of pinion shaft penetration into the 5mm bush as previously described, that's important to me here.

I've begun to work on the X plan, each motor gearbox weighs just under 4 kg, this weight is supported by three mounting M5 bolts at the gearbox end. Rotational movement will put stress on these support bolts, this rotational force is going to be balanced with a simple light weight bracket.
It would be a lot easier with a flat belly plate though.

Well pilgrims the spacers have been machined, the space, gaps and alignment all seems Apple pie

because I've had a few problems.
Easy repairs though

I'm doing this with every soldered joint as part of my reliability program.

The wires were de-soldered from the plugs then re-tinned and re-soldered and new insulation shrunk on.