Interesting to see that Stephen White will be modelling 01 as OB October 1987.

I joined Feb 85, went through basic training, and was then sent to an artillery regiment for a couple of months as a dogsbody before the next available trade-training course started.
Passed the maths phase in the first week of the four week phase ( I had A grades at A level both Pure & Applied Mathematics ) so another couple of weeks being used as a dogsbody.
Then the BE or Basic Electronics phase. Came top of course so had first choice if I wanted to go ECE, Radar or Tels.
Then on to the ECE phase, trained to fix Chieftain systems including hull electrics, turret electrics ( make sure the BV circuit works ), FVGCE, RMG firing circuits, Searchlight, Clansman harness, NBC pack etc.
Arrived in York Barracks in Münster, Germany either very late December 86 or very early January 87 at the QRIH LAD and straight out into a Sqn Fitter Sect. None of the tanks had the RMG and they were being backloaded to be replaced by Challenger 1.
The only job I ever did on the searchlight was on one tank to disconnect the electrical connections. The searchlight stuck out too far for rail transport , when the turret was traversed rear, so had to be removed and stowed on the back decks.
Being straight out of training, I should have been supervised at all times, but one night I was allowed to "play" on a tank. It was supposed to be backloaded the following morning but the Gear Change Pedal was faulty and all the spares the Regt held were also faulty. The ECE Sgt and ECE Cpl were busy sorting out a different tank to be backloaded in its place and could not afford to have me under their feet.
90 minutes later the following conversation happened.
Me - "Sarge, the GCP is fine. It is a knackered harness between the HMJB and a pressure switch on the hydraulic line at the right hand side of the drivers cab."
Sgt ECE - "Can you prove it ? "
Me -" Yes, connect this 2 meter long cable that I manufactured between the two."
Sgt ECE - "How long to replace the harness ? "
Me - "No replacement harnesses in stock, I have already checked, and the crew will have to get the right hand charge bin out as it runs behind it. Or I make a 8 meter lead and run it right around the driver´s compartment hiding it out of sight."
Sgt ECE - "You think you can ensure that it will not be seen ?"
Me - "I think so. You have not seen it."
Top
Online

Richard Goodwin on Phil Woolards thread supplied a source of 50 round belts.

I recall the following but stand by to be corrected on any of the points
1) They were issued in 200 round metal boxes. Commanders GPMG would have a mount for one box, possibly a second ???. Loaders station on Challenger 1 had two slightly curved trays in parallel. Each tray held 4 or 5 boxes worth linked together. I am not sure if it was the same on Chieftain. Infantry would split the 200 rounds down into smaller amounts to share the weight around the people.
2) 7.62mm link was available in different flavours. There were ball rounds and tracer rounds, and link was available in different ratios between the 2. I believe the tanks normally got 1T-3B or "one-in-four" so every fourth round would need to have a red tip to indicate it was tracer. Best to wait for someone who crewed them to confirm it was indeed that or a different ratio though. Better still, mark the rounds to match whatever marking you have on the box.
3) A belt of spent rounds would not be on the other side of the GPMG. The rounds were pushed out of the links during firing, and individual and seperate links and spent cases were ejected.

Hi Gents,
on tanks (CH, CR, CR2) the MG ammo was 1BIT (1 ball 1 tracer) and was used for all the machine guns on board, it came in two hundred round belts and was linked together to fill the ready round bins on each, one reason for the 1 in 1 mix was for better targeting and the other was so when Inf were involved they could see the amount of fire going down to give them more confidence to go forward knowing the tanks were pouring fire in to suppress the bad guys, we as tank crews were often asked if we could donate a few boxes of our 1B1T by Inf and Eng guys (who had 4B1T) so when their guys had to work in the open doing Bridging, GV, mine work, assault ,ect they could see lots of trace going the way of the bad guys from their own call signs as well as ours to make them feel safer.

On the subject of the GPMG in whatever role, belt fed in from the left with link ejection to the right and case ejection below as it had its ejection port below the ops system.

on tanks it was not uncommon to replace the official spent case bag with a sand bag which could hold more to allow you to fire more before having to empty the bag.

On a Scorpion CVRT we would not fit the spent case bag and allow the cases and link to flood into the main case collection bin.


On CH2 with the MG on the loaders side we would bin the case collector bag as it would be full before a box had been fired and would cause stoppages,
ok empties all over the turret but a working MG when you need it, just watch your set later.

I stand corrected.
Must have been 4B1T we got on the fitter section vehicles for the GPMGs.
On one range package I was on, there was a jimpie shoot with all the support vehicles up on the point blatting off down range. I was deep in the guts of a tank at the time fixing it so did not take part or even see it. The crew wanted me to assist with cleaning the GPMG afterwards. My answer was "You got it dirty, you clean it !!"

I was also on one range where a tank had a fire within the turret during a battle run. Investigation afterwards showed that it was caused by the loader using a HESH bag charge container to catch the spent MG cases and the hot cases had caused it to ignite. What however could never be explained was how the gunner, who had spotted the fire first, managed to get out of the tank and up onto the turret roof before the commander did.

Also from my experience as an ECE, spent cases on the turret floor of Chieftain and Challenger 1 were not desireable. They could cause RBJ lockups disabling the tank. The RBJ ( Rotary Base Junction) was the electrical connection point between the hull and turret. Various connections to the power pack also went through it. If it locked up, southdown connectors on the bottom half would be ripped off. The RBJ on Challenger 2 had cover plates to deflect any falling items and prevent this happening.

In Bosnia I had 2 of 12 Challenger 1 tanks down due to RBJ lockups caused by spent 7.62 cases. Both tanks had last fired coax about 6 months previously.

Hi Mark,
i would suggest that the fitters got 1B1T just like the rest of the Squadron, it would not make sense to demand different mixes on an ammo replen, as you roll through you just said how much of each nature you needed and it was passed across, it would cause hold ups if you had to look for different mixes of belt.

As a gunnery instructor we would control the fitter sect shoots and it was normally the craftsman who would do the shoot, reasons being they would be more likely to be on sentry and need to use a gpmg, the young crafties were more keen to have a blat, the old and bold did not want to spend time cleaning the machine guns as they had wagons to fix and finally if the crew were in action why expose themselves to use a pintol mounted mg.

Occasionally on ranges, there would be a few DST or ShPRAC left over and the REME fitter section would be given the opportunity to put people in the gunners seat and fire them off.
We always sent up the newest and youngest tradesmen
a) as a reward for the work they had put in
b) so they could better appreciate what the tanks did, and why we were better employed making sure that they worked.

Normal response afterwards was that they enjoyed it, but what was the next tank to be fixed so we had all of them out in front of us. I am aware of only one occasion where a REME tradesman transferred to the parent unit, QDG. The loader on a tank suffered a severe back injury on exercise and had to be CASEVACed urgently by helicopter. A young vehicle mechanic who we could spare, volunteered to jump into that postion to keep the tank operational. He enjoyed it so much he asked to transfer.

Normal jimpie shoot that I know of was with them ground mounted, ie sentry positions. I am only aware of one when all the support vehicles were driven up onto the point and they were fired from the commanders mount.

Initial issue was likely to be 1B1T as John says. Later issues could have been different with the tanks having priority for the 1B1T, the same way they had priority for the 4-man Compo packs. 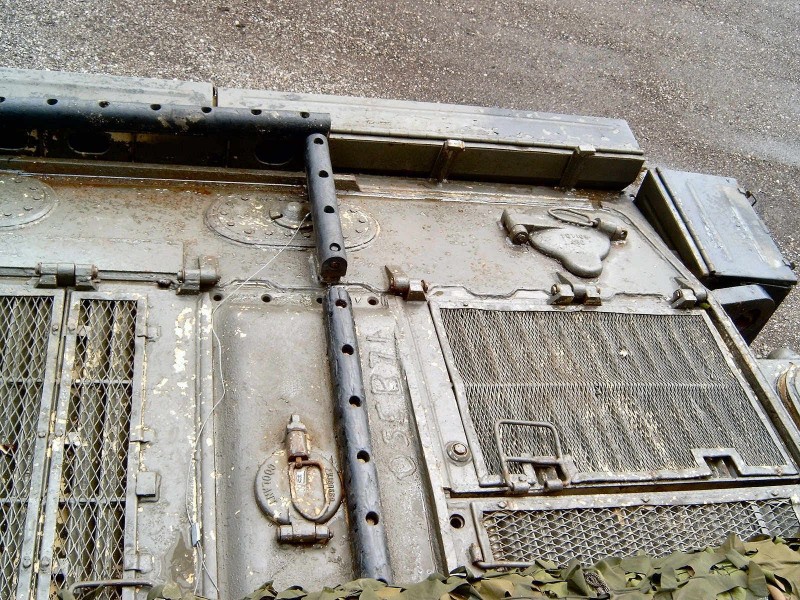 Photo copied from Phil Woollard´s thread. Note the VRN on the T-piece
Top

Now I know where the VRN sits on the T piece! Thanks Mark.
Top

Has anybody found any suitable continuous piano hinge for the kit boxes because I'm struggling to?

Hi Phil, have you tried franz-holz.com? They do cigarette box hinges .Loving your work btw!

I think they sell cigar box hinges in a roll of 5 metres, that should do the trick.

I don't know if these are suitable. No harm in having a look.

I am the master of the daft question. Agreed I am a Newby to the Armotek models, but thoughly enjoying building Chieftian (34).

I am following Phil's build & have taken his lead to some degree, within my own capabilities.

Daft question time: The only reference drawing I have of the vehicles rear shows the unused NATO towing fitting as off centre, is this correct. It doesn't make sense to me.

I would welcome a thread/sauce of accurate tech drawings. I would post a photo, but my phone seems use a lot of MB per picture.

That makes more sense to me, the other "boxes", light for convoy mark to right, plug in for the not fitted tow hook, left. Makes sense, thank you.

What's the box for, on the far right for. As seen from the rear?

As long as we're talking masters, me being the one of stupid.
Just how do you open the drivers hatch from the outside? (No handles)
It's always been open when I've got in.
Is it a push button type? push in and it pops up? push in again and it locks.

And has anyone been decapitated by the swinging action? if the locking mech failed. (just my morbid curiosity.)