Here are a few I dug up. Mostly post-war.

One of the challenges with RR Armoured car pictures is that many (if not most) are mis-captioned. They were "All" used by T.E. Lawrence. And one desert looks like another. So over the years, there is a massive amount of historical bovine scatology about what pictures are what. It's part of the project my friend and fellow-military historian have been working on to organize and get some realistic research behind the photos. See our Blue Mist article from 2017, if you have not seen it already.

As I mentioned, I highly recommend Col. Barrass's book. He probably did more research than anyone on the subject before his passing. Eric was a great gentleman and did a lot for the RR community.

Here are some photos. A number of them are from the NoPerForce (Northern Persia Force) from right after the war... on the Soviet border. An interesting time for the Armoured cars, but I think most of them were 1914 pattern that were left over and moved in. But Eric's book would shed more light.

Here are a few pictures. There is some confusion over Wedding Bells II... which *may* be the Tank Museum's armoured car? Wedding Bells 1 was a very early armoured car.... predating the Admiralty pattern. I've added notes where I can! Which isn't much. 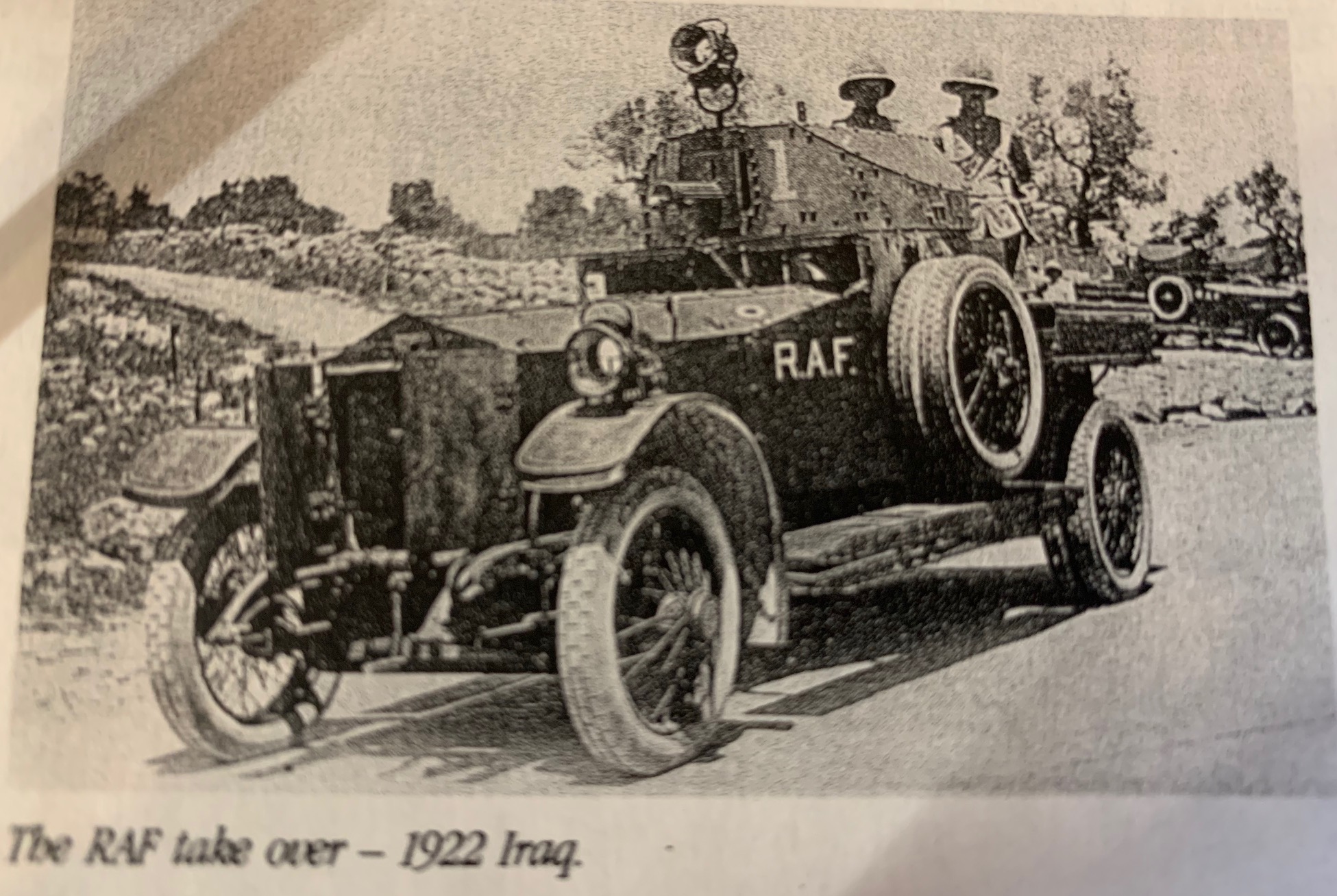 This may be one of the most relevant pictures. According to caption Iraq in the 1920's but take with a grain of salt. 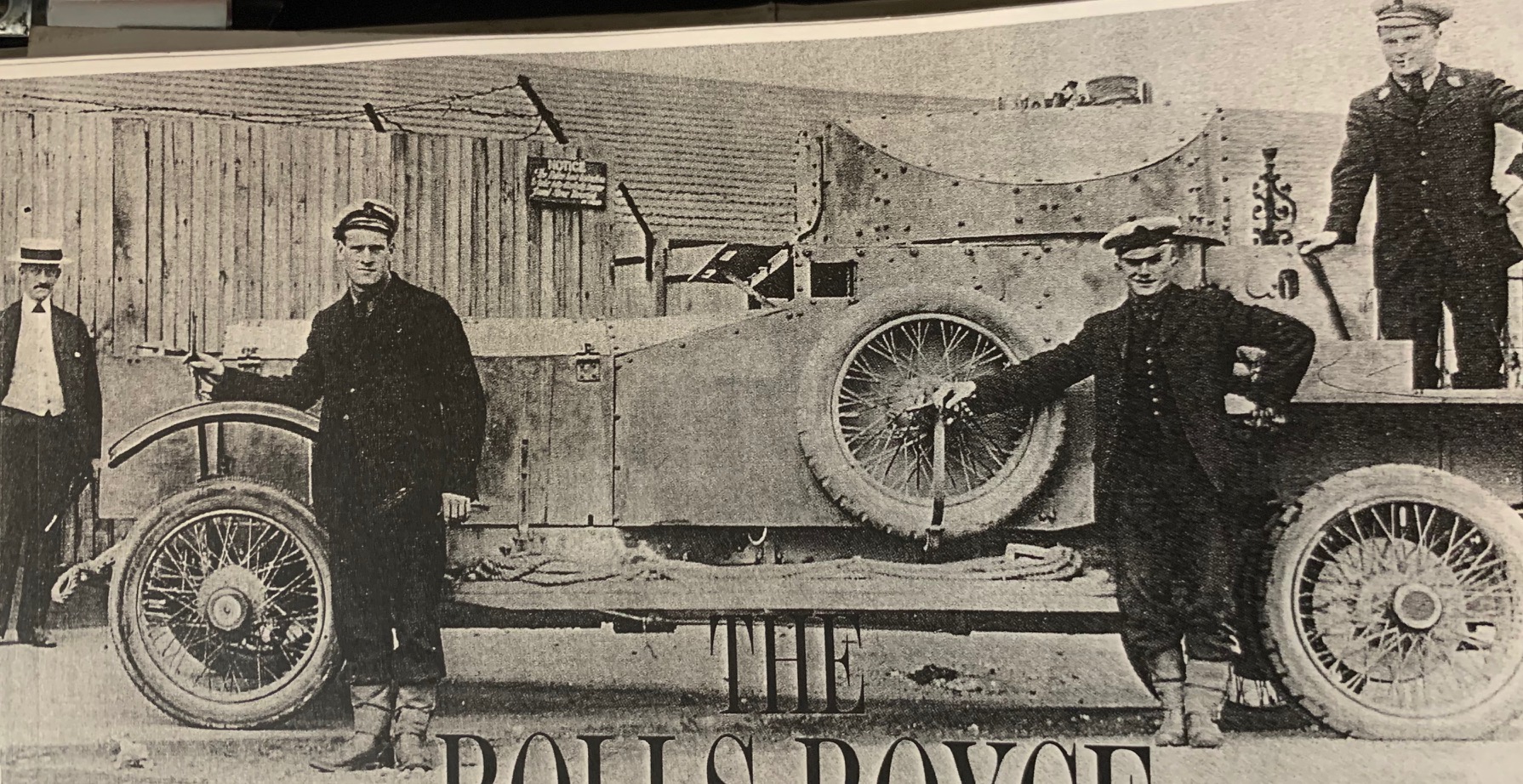 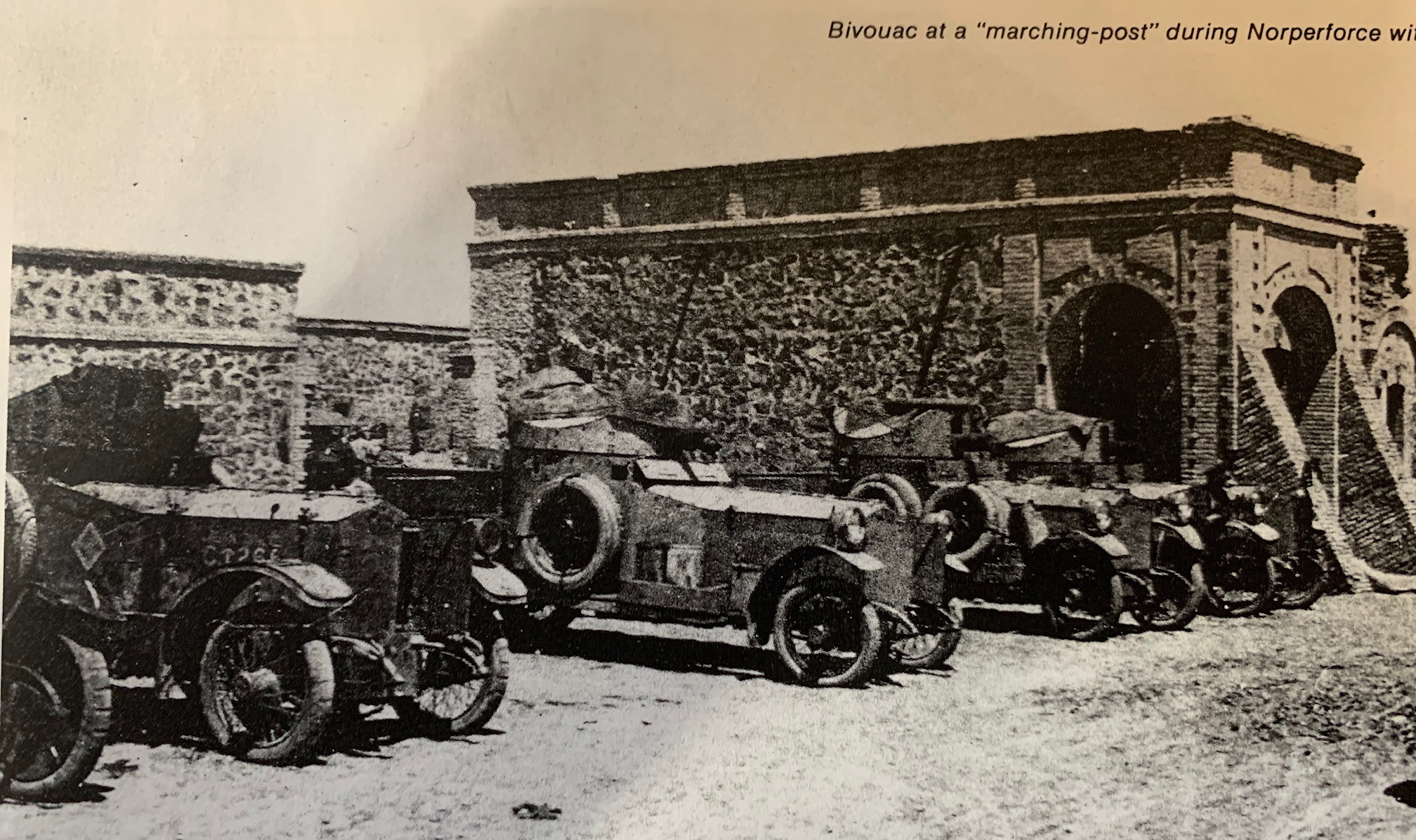 This is NorPerForce picture. But these seem to be 1914 pattern. 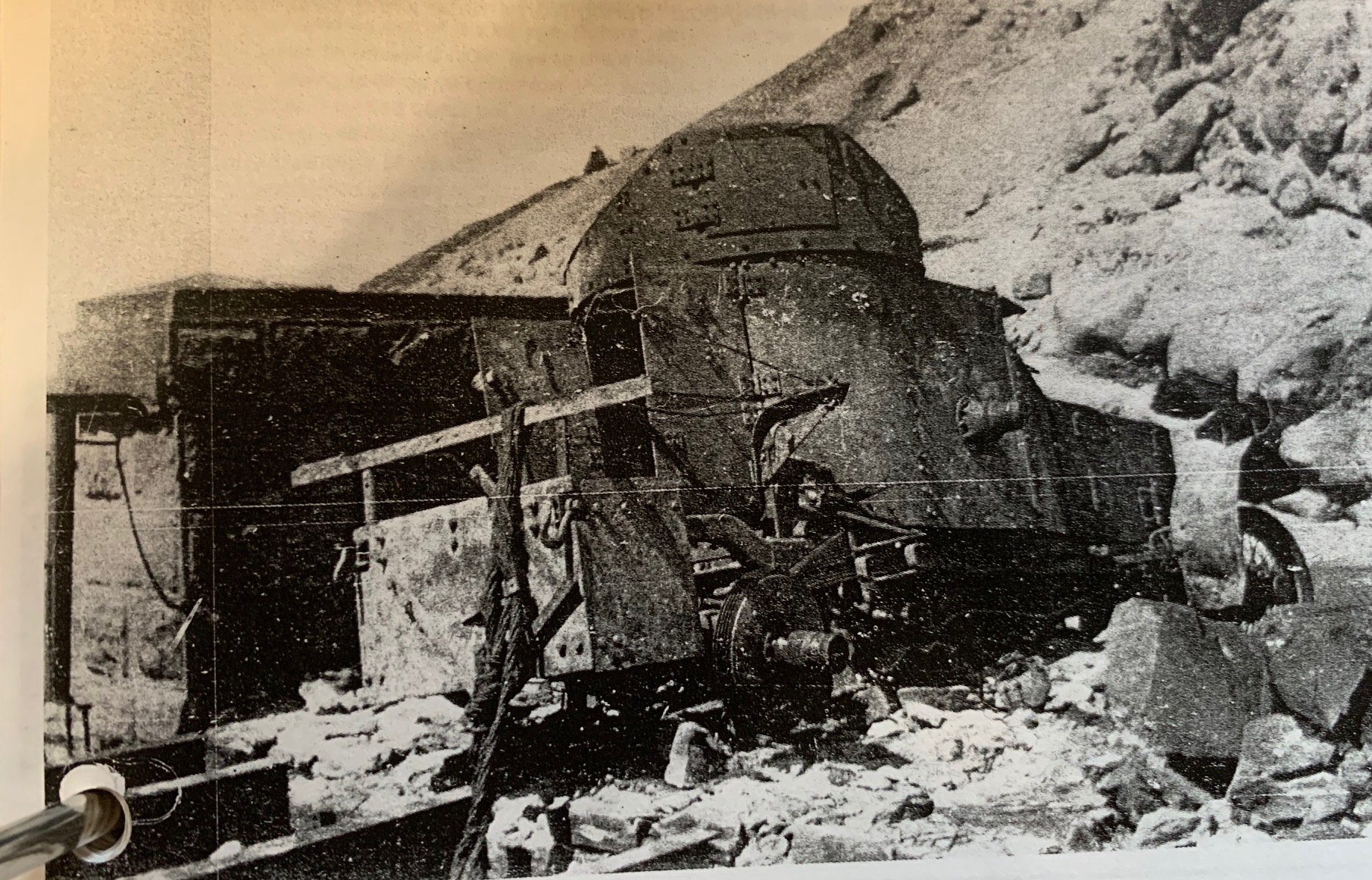 I think this was the Flying Fox, destroyed in Persia as part of NorPerForce 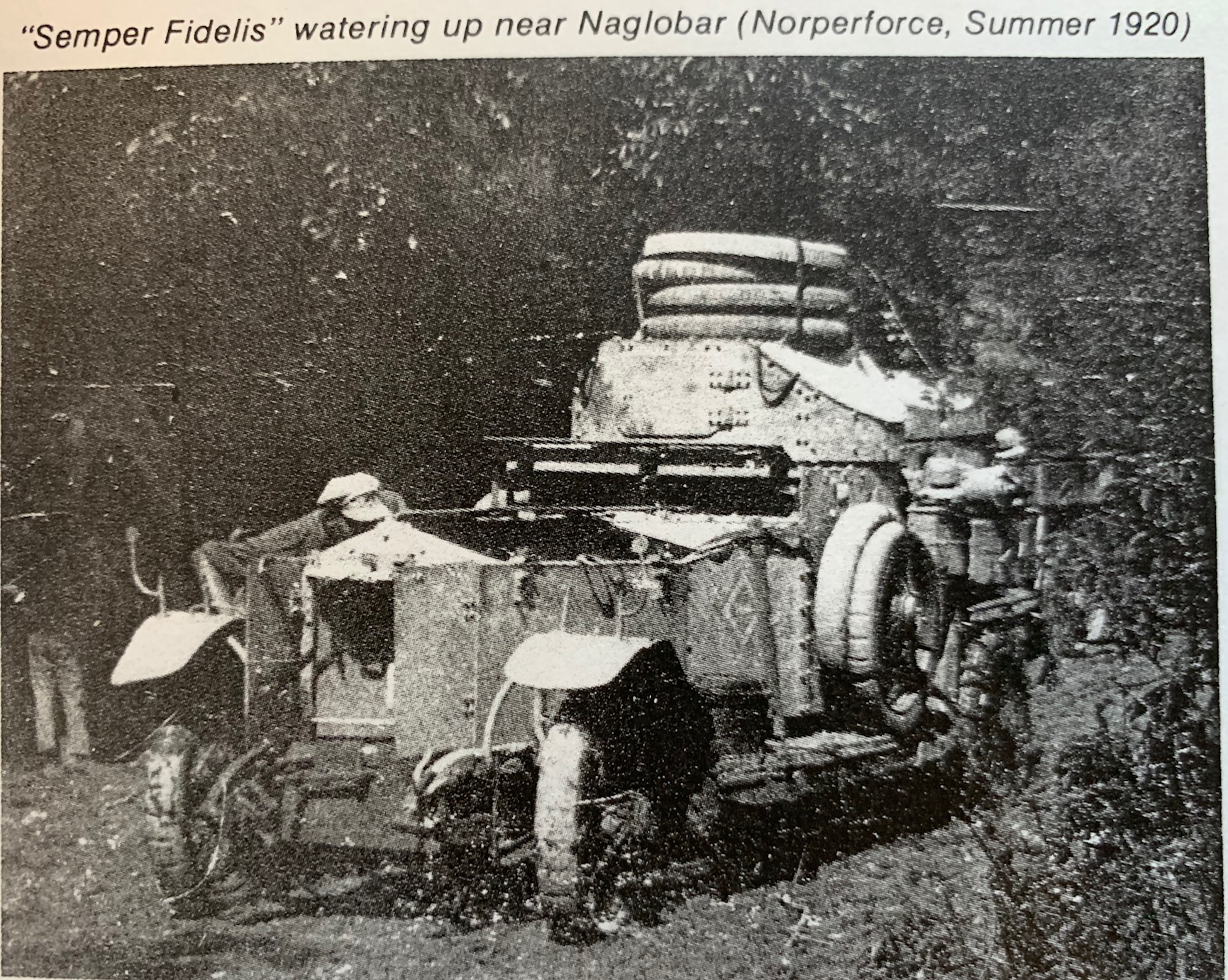 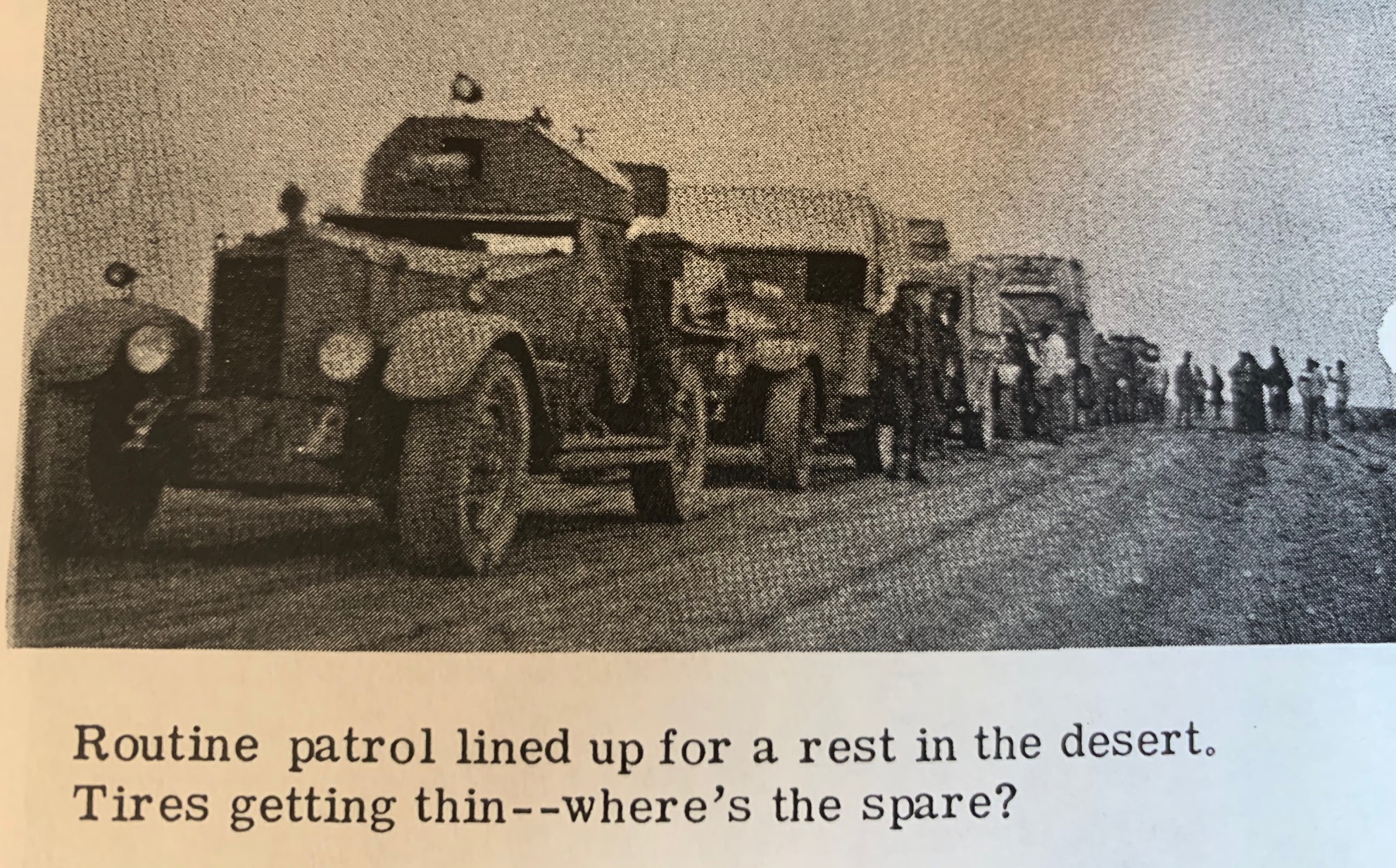 This was from 1940, also Iraq if memory serves. By this time, the bodies may be on Ford Truck Chassis. Late in life, the Ghosts were simply too far gone and too much to maintain. But the armour was still useful and it was transferred to Ford chassis as they were likely the same wheelbase. 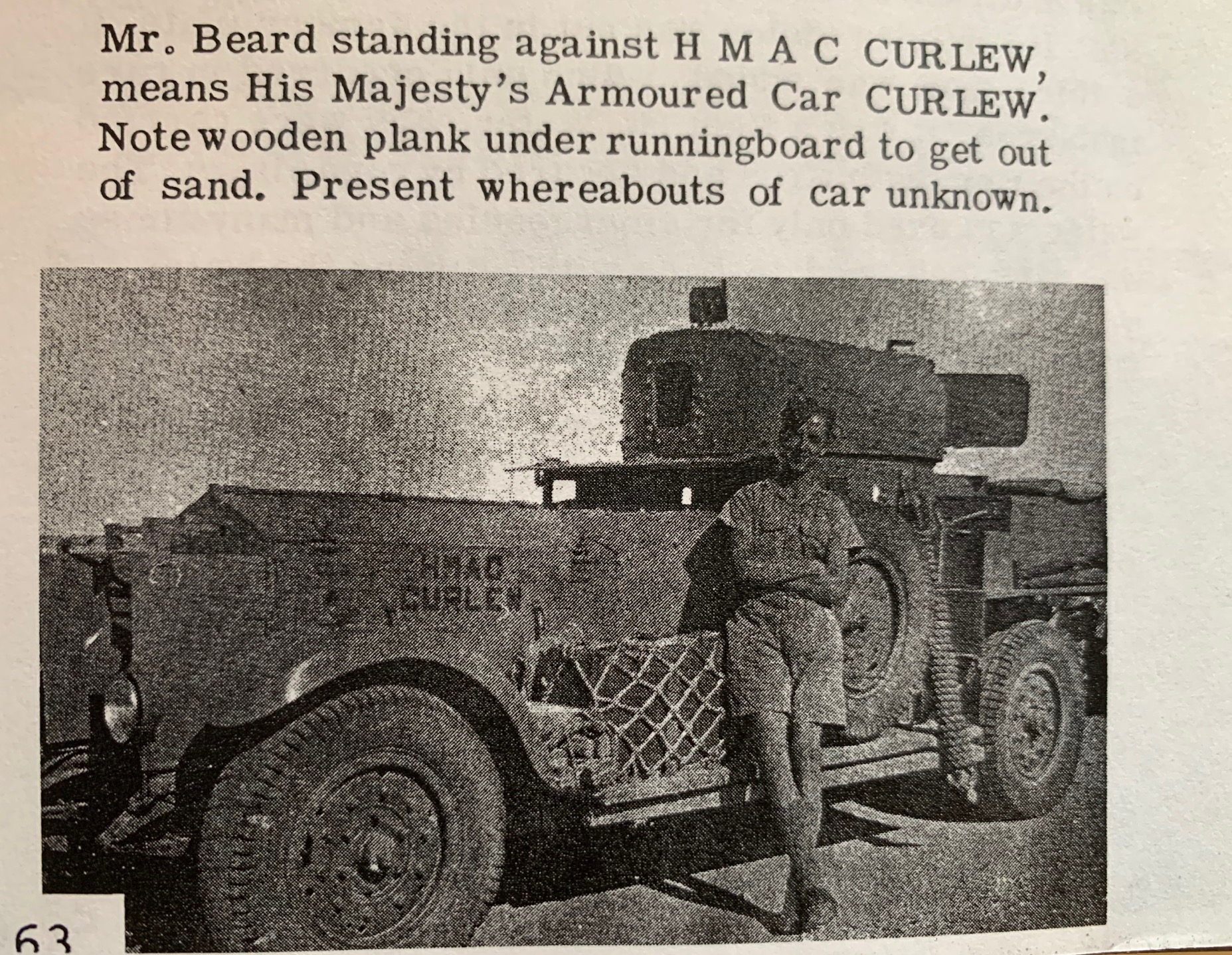 May be from the same time as the above picture. Note the wheels. 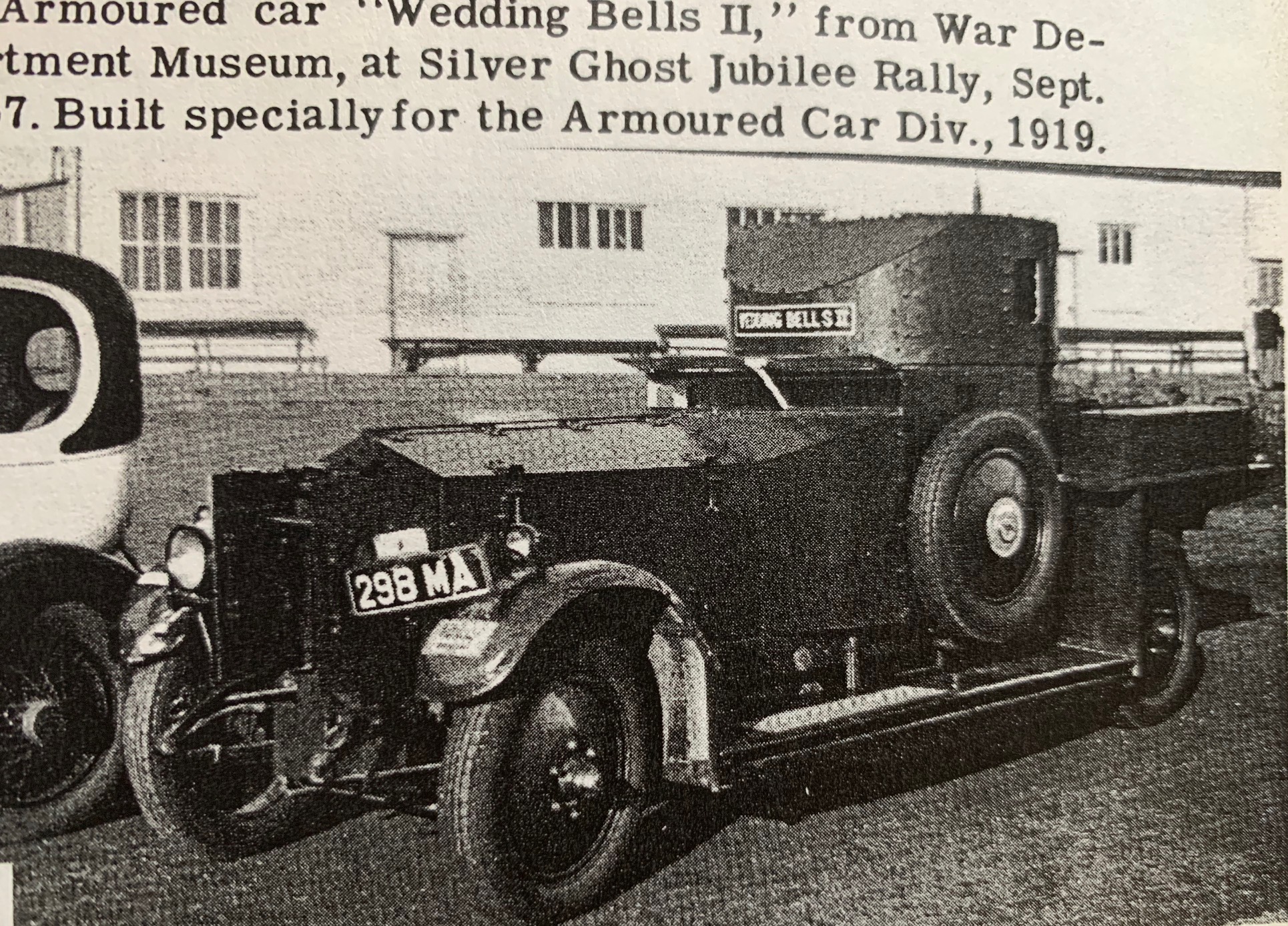 This is one of a couple of confusing photos. Because this was also captioned (later) as being at the Tank Museum. But I don't think it's the same armoured car that is with them presently. At least the registration is different... even if the cars are remarkably similar. Is Wedding Bells II the same car that is at Bovington today? 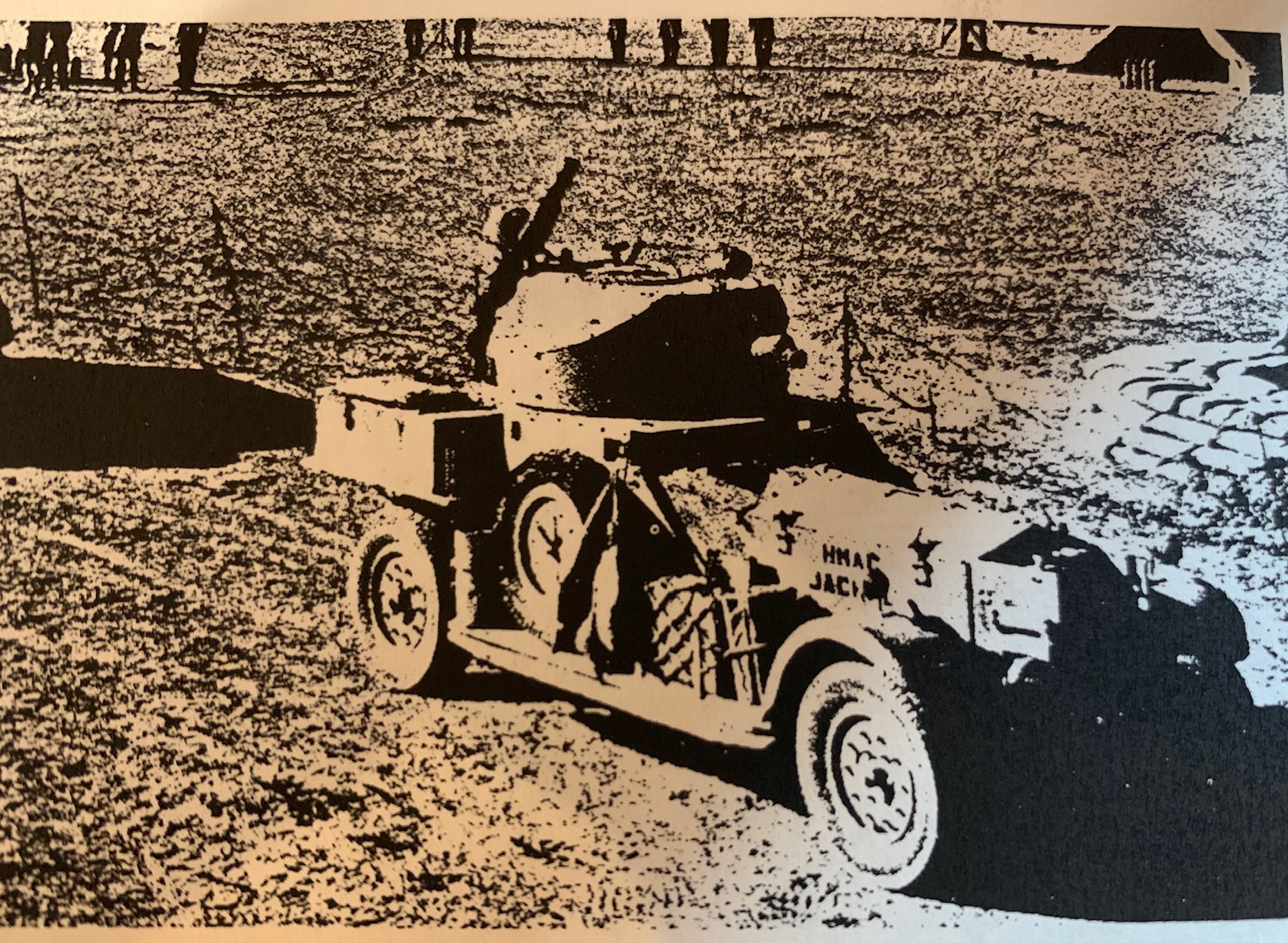 This is a post-war pattern car with a Lewis gun... but note the very late wheels. Again, possibly late '30s or '40 in Iraq? Not sure. 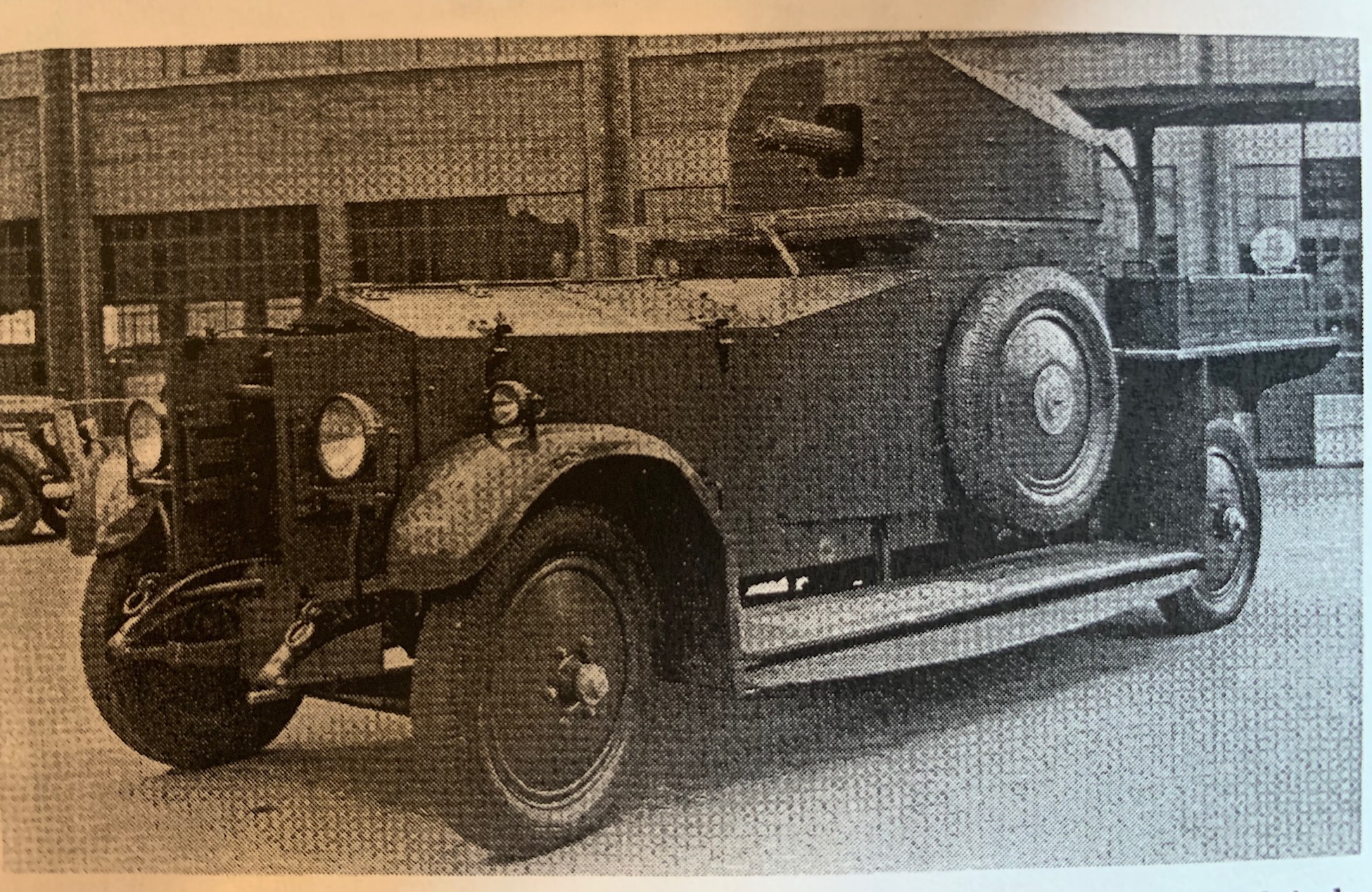 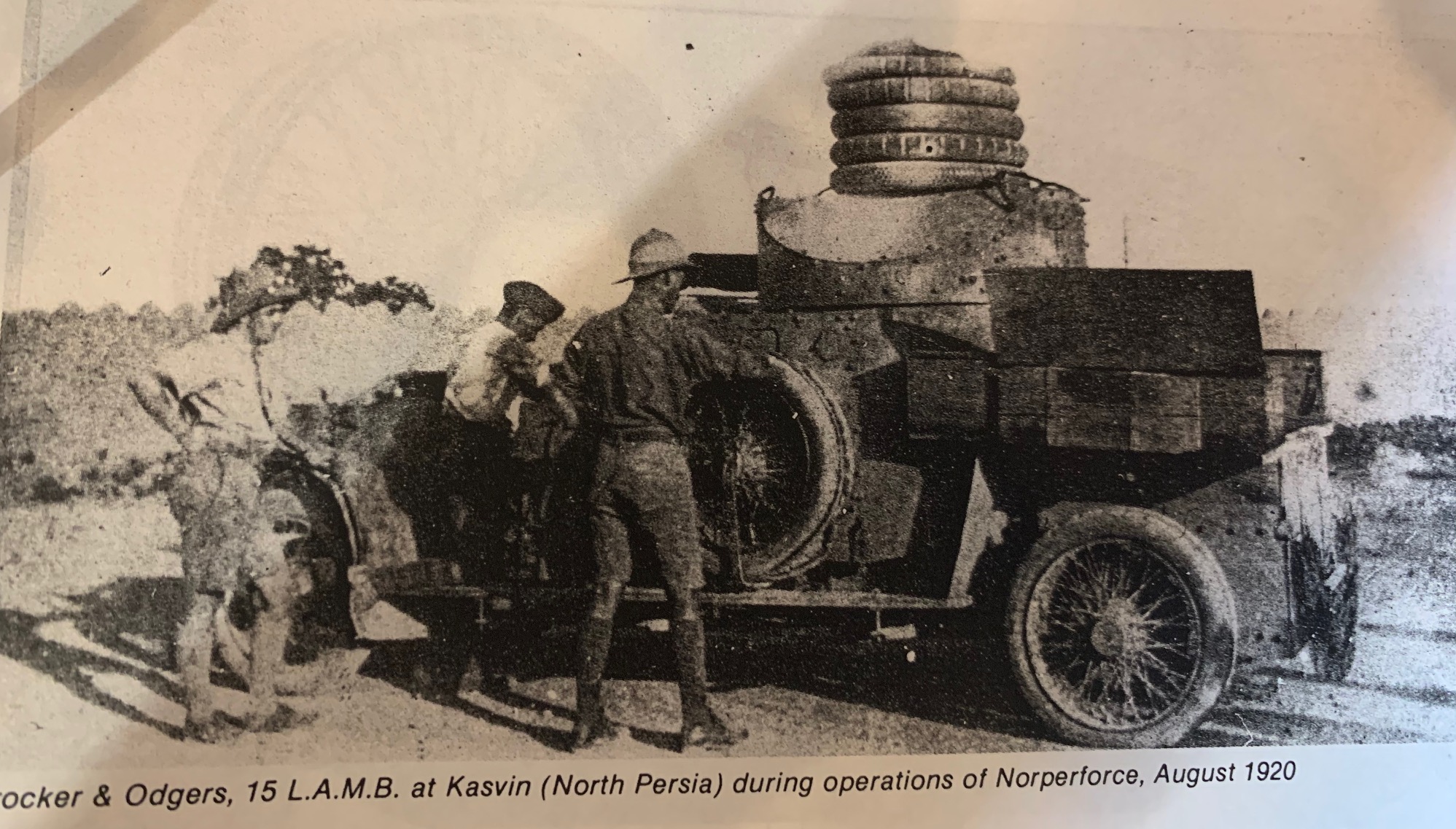 Got enough spare tires there, guys? NorPerForce 1920. But this looks like a leftover 1914 pattern car...not a new one. 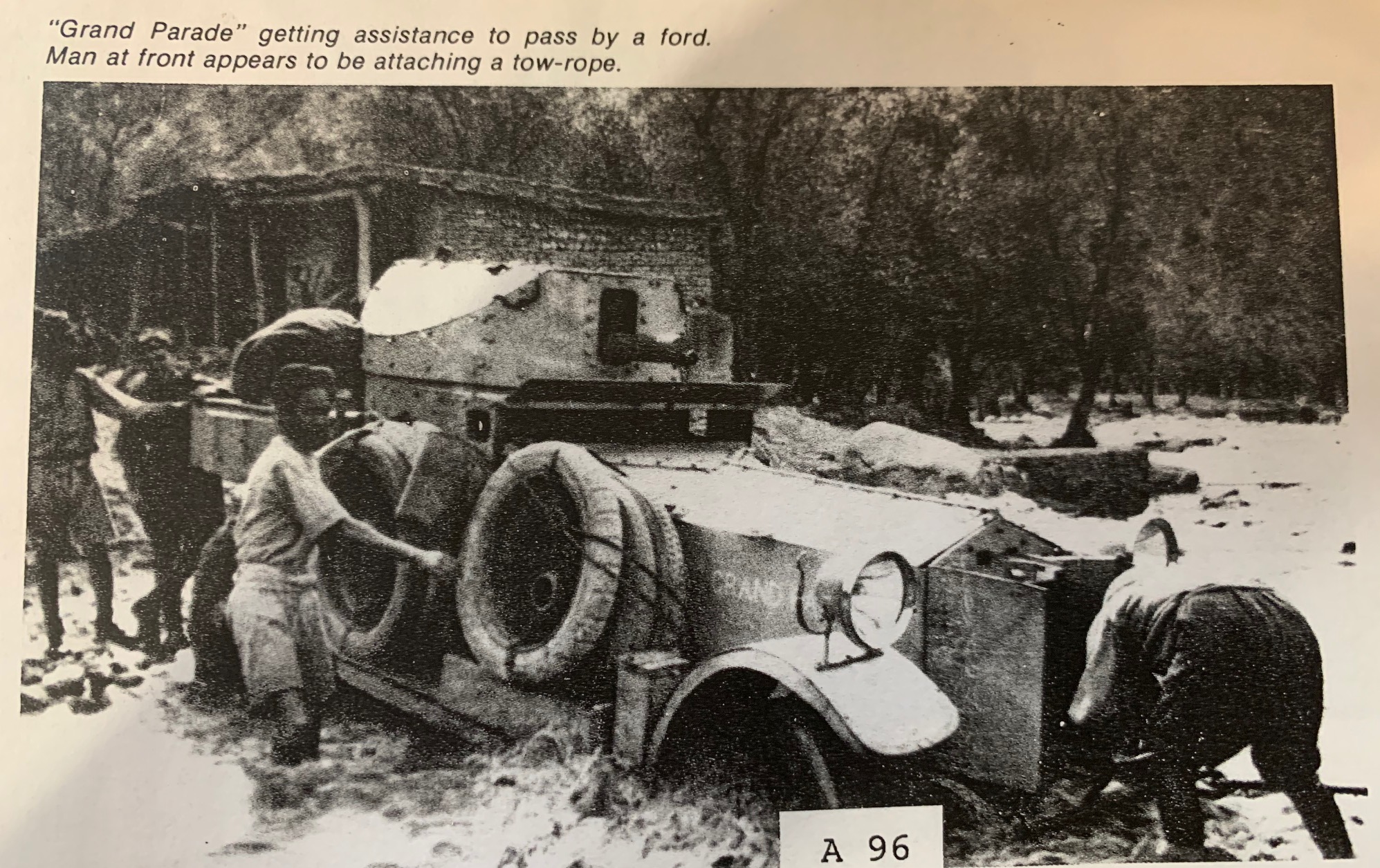 Another NorPerForce photo that definitely looks like a 1914 pattern. 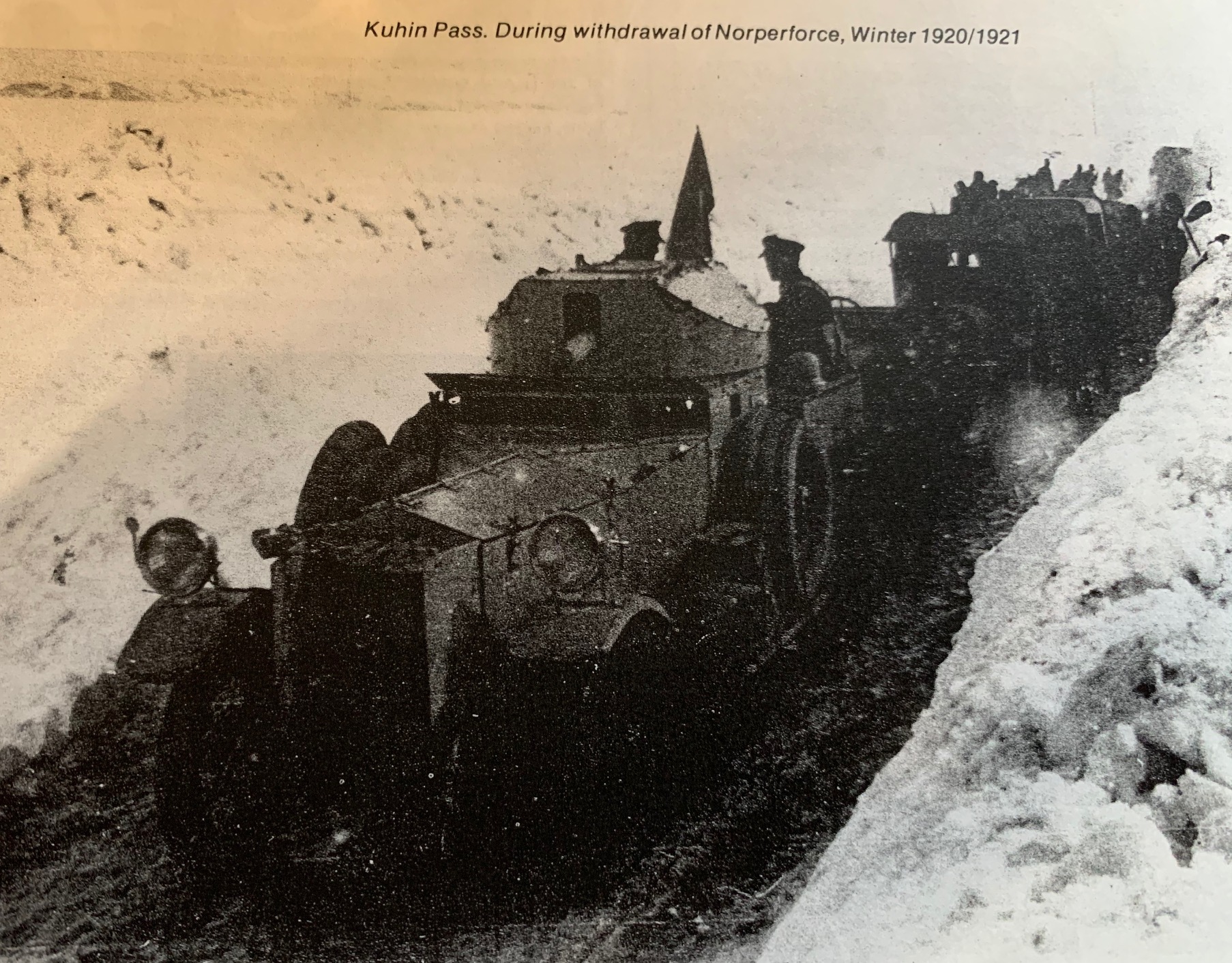 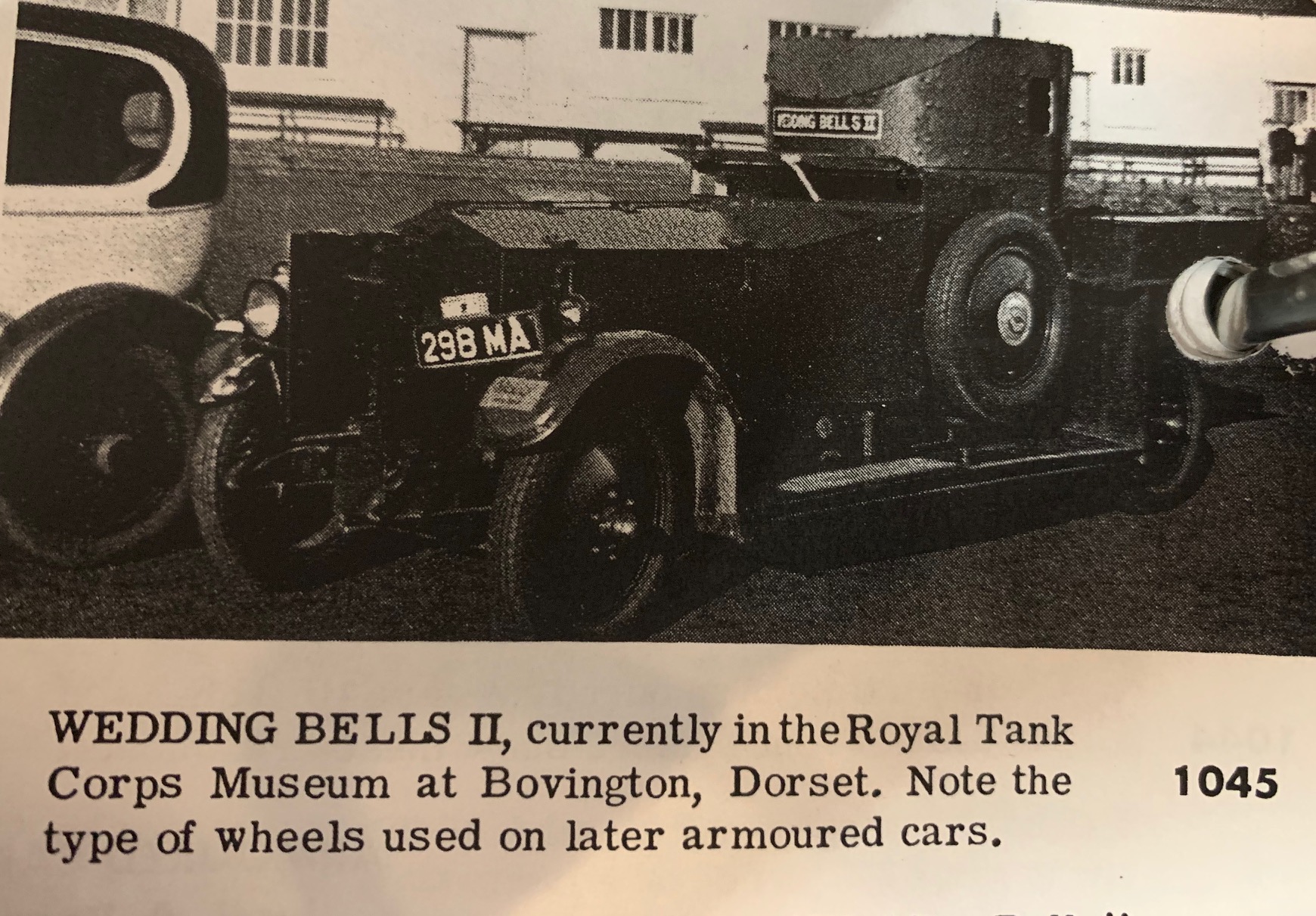 This is the Wedding Bells II picture from above... but with a different caption saying this time that it is at Bovington. Is Wedding Bells II the car that is currently at The Tank Museum??? 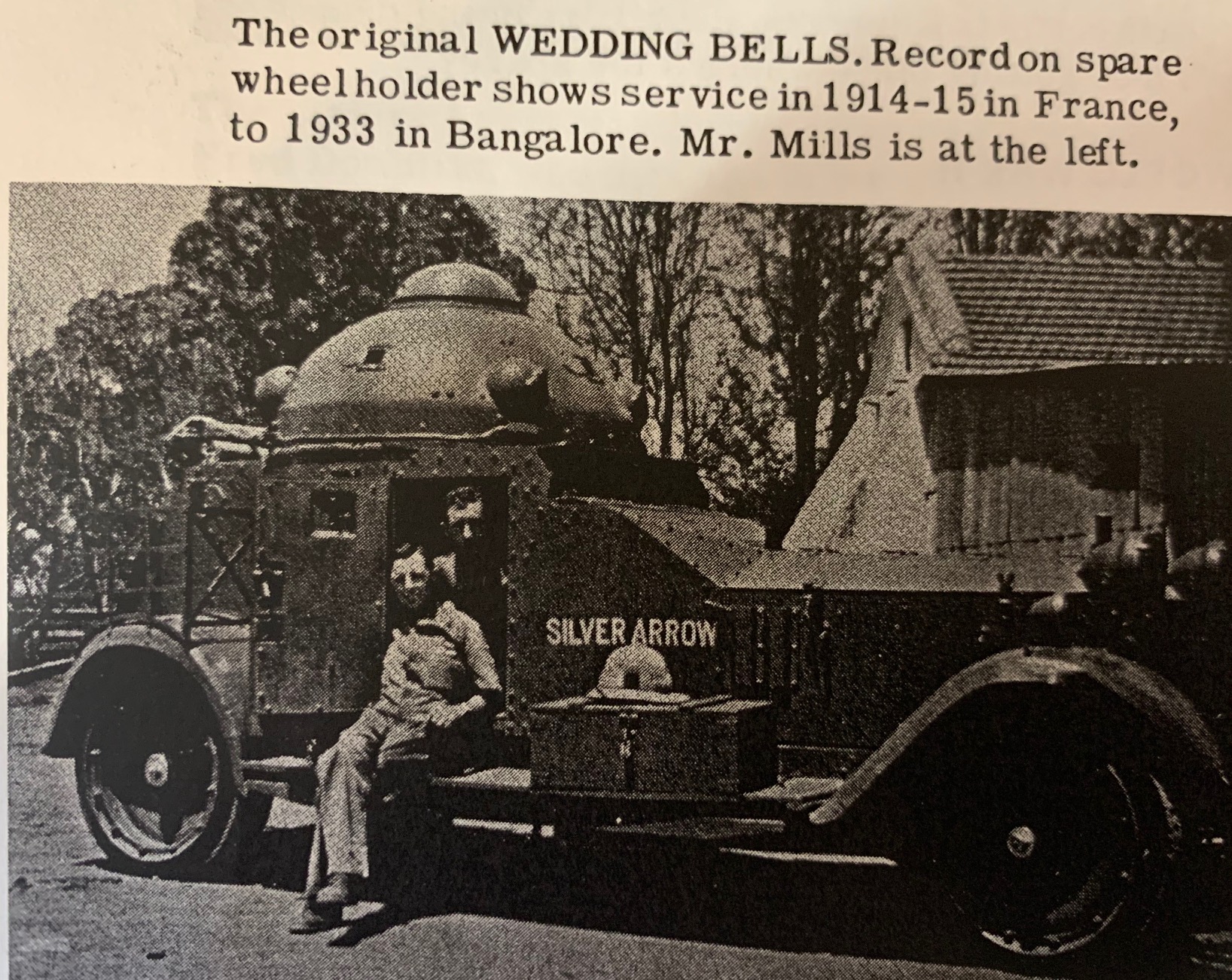 This is the original Wedding Bells... a 1914 pattern car that was all over the place in WW1 and then ended up with the above India Pattern armour on it... and in Banglore. I think that this car is now gone. But it had an impressive battle record and was 'everywhere' in WW1. Is it in India, still?

That's it for now... hope this helps with your build, Phil!

As this thread will be up and running quite soon some photos we quite like. Research is ongoing and sure gives a fascinating insight into these iconic vehicles

Chris and Robert your input is very welcome!

The RR kit arrived this morning, extras to include the engine and plinth, the solid wheels, turret search light and a superb metal Vickers machine gun.

Commission builds awaiting their turn, should keep me busy for a while.

I thought I had a lot to keep me busy ....That's s a mountains worth of kits you have there

Look forward to seeing what you do with them.

That's only half! The back of the van was full!
Top

I like the RAF roundel on the turret roof! That Vicker's is awesome! Did you win the Armortek lottery and find a storage locker full of kits?
Bob
Top

Hi Bob, that RAF version is going to look the business. I reckon Phil Dawe defiantly won the Armortek lottery!

Off we go, spring set assemblies and chassis work. The kit has some very nice intricate parts with a good fit to.

Lots of machining marks to work on, before and after photo.

I tend to turn down the fixings head to get it below the surface rather than counter sink a bit deeper, some of the suggested fixings are just to long in the thread.

Filing square section into round/rod for the chassis stiffeners.

A good days work with a big pile of parts bags to show for it.

The very fiddly extra leaf spring brackets made and fitted.

The kit position for the steel running board come ladder/ramp.

New running boards made from timber.

The new running boards with the sand ladders slung underneath, well that's the plan.

The more I research these vehicles the more interesting they become.

More of the build to come next week.

The boss sent me this splendid book for hot tub reading after workshop duties.

Good reference photo for a nicely kitted out and we'll used vehicle.
Are they semaphore flags and poles stowed on the roof?

Phil, really good to see you back building on the forum. Watching with great interest so thanks for taking the trouble to post.
All the best
Kevin
Top

Cracking on with the extra chassis details and I've made a good start on the rear axle which is a work of art.

All set out and ready to go.

Running in the diff.

The drive pins are off centre.

The diff has been greased now that I don't think it has to come apart again.

The half shafts will need some work.

Keeping the finish to a high standard, well it is a Rolls Royce!

Lots done, there's some thought gone into this chassis.

Lots of extra rivet detail added to the exposed chassis.

Just about all the parts need some trimming.

These two halves didn't line up true but they do now.

Fashioned the rear leaf spring mounts to look more like the real thing.

I have spent many hours trimming the half shaft trumpets until it all fits with little to no gaps .

I have managed to get the rear axle just about perfect with everything lined up.

The front axle all set out ready for deburring and assembly.