Adrian
Contact me at sales@armortekaddict.uk for details of my smoker fan control module and other electronic gadgetry
Top

Just so noone thinks I've been idle... this was one of my summer projects... 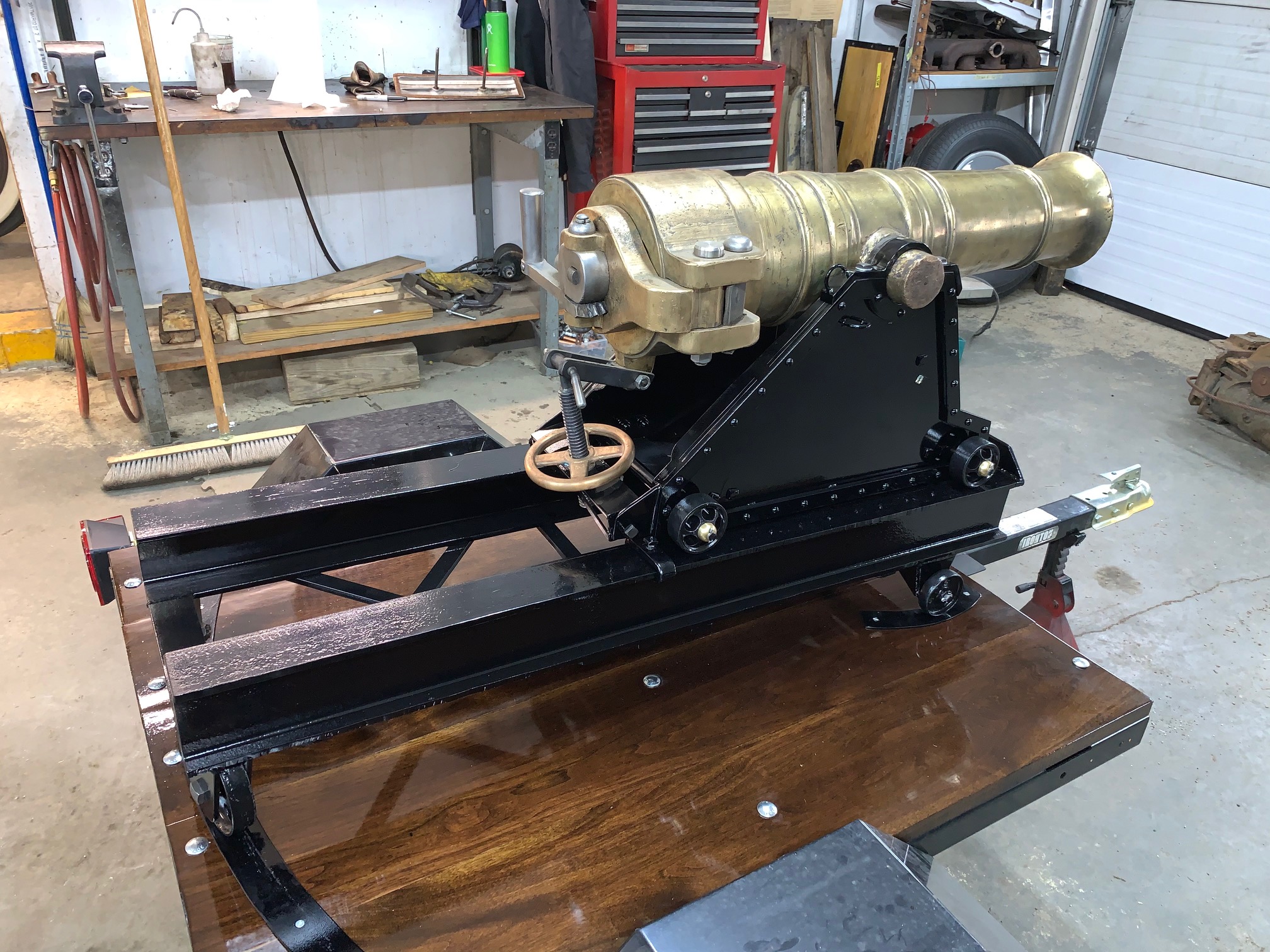 Restored barrel and interrupted-screw breech. Built the entire rampart mount from scratch. Built trailer and Walnut bed to hold it.

One of my better 1:1 models, I think! And, yes, it's fully-operational.

Not much done last few weeks. Been working on a HMMWV project. 1:1. It's a fun rig. Repels Hybrids!

Anyhoo... I did take a bit of time before the Christmas break starts to work on the gas tank. I've mulled this over a lot, ranging from making a new on out of sheetmetal to hollowing it out for lightness to... even weirder thoughts. But in the end decided just to get the rivets on and make the pickup area a bit more detailed.

Right now I am pretty drill-happy after countless 1/32nd holes into aluminum. But got the basics done. I still need to make a drain and the tail-light brackets (the brass you see in a couple of pictures.) Those will get soldered up and bonded/riveted. Gas cap works. I need to make a wrench for it! And a dipstick 'fuel gauge.' It just has to be done! 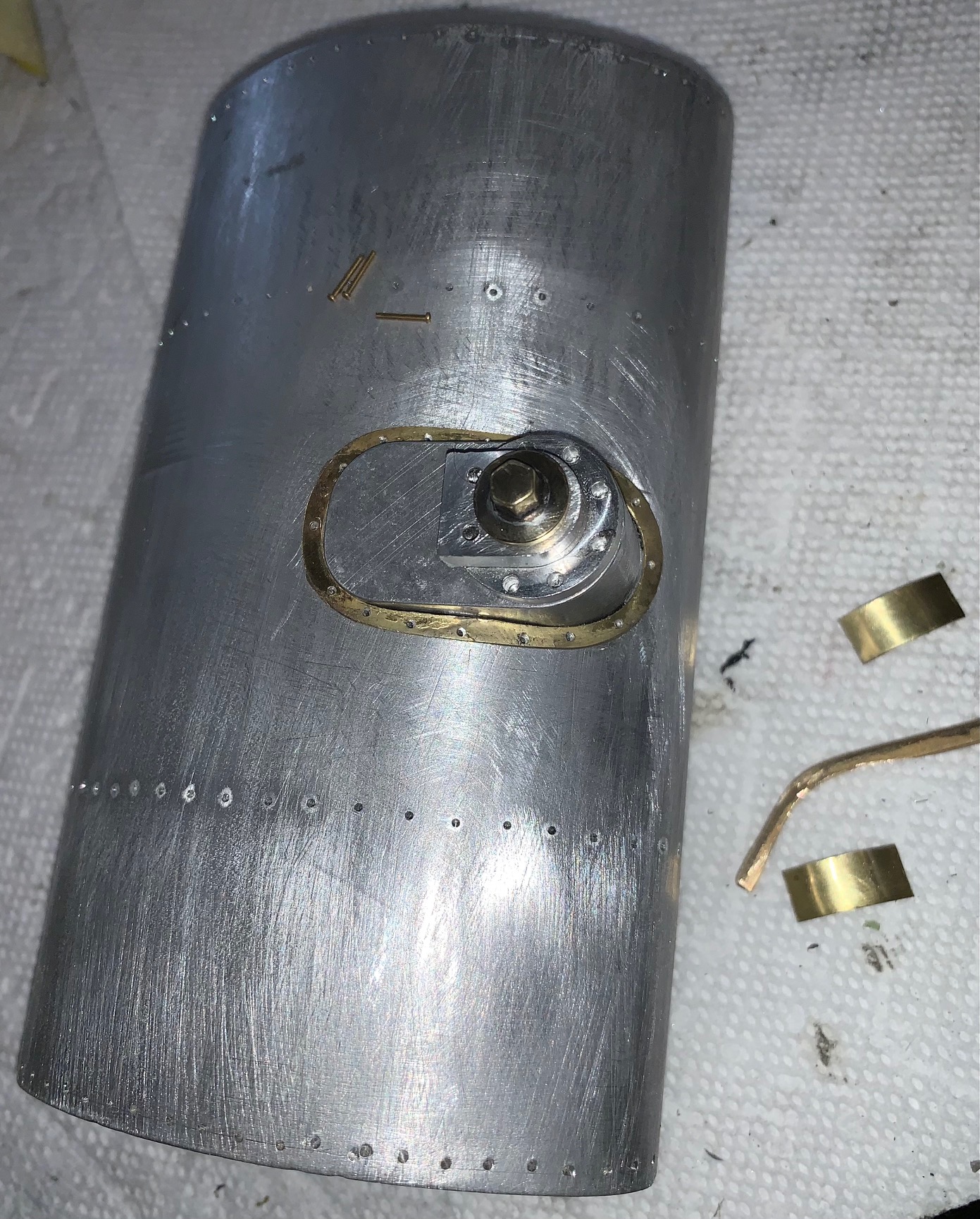 End flanges, also riveted on. And on the 'real' car soldered. BTW, on the originals, these bosses are hollow. And sometimes gaps form in the solder. And they fill up with old gasoline. And when people try and solder them... poof! No eyebrows. Happened more than once! 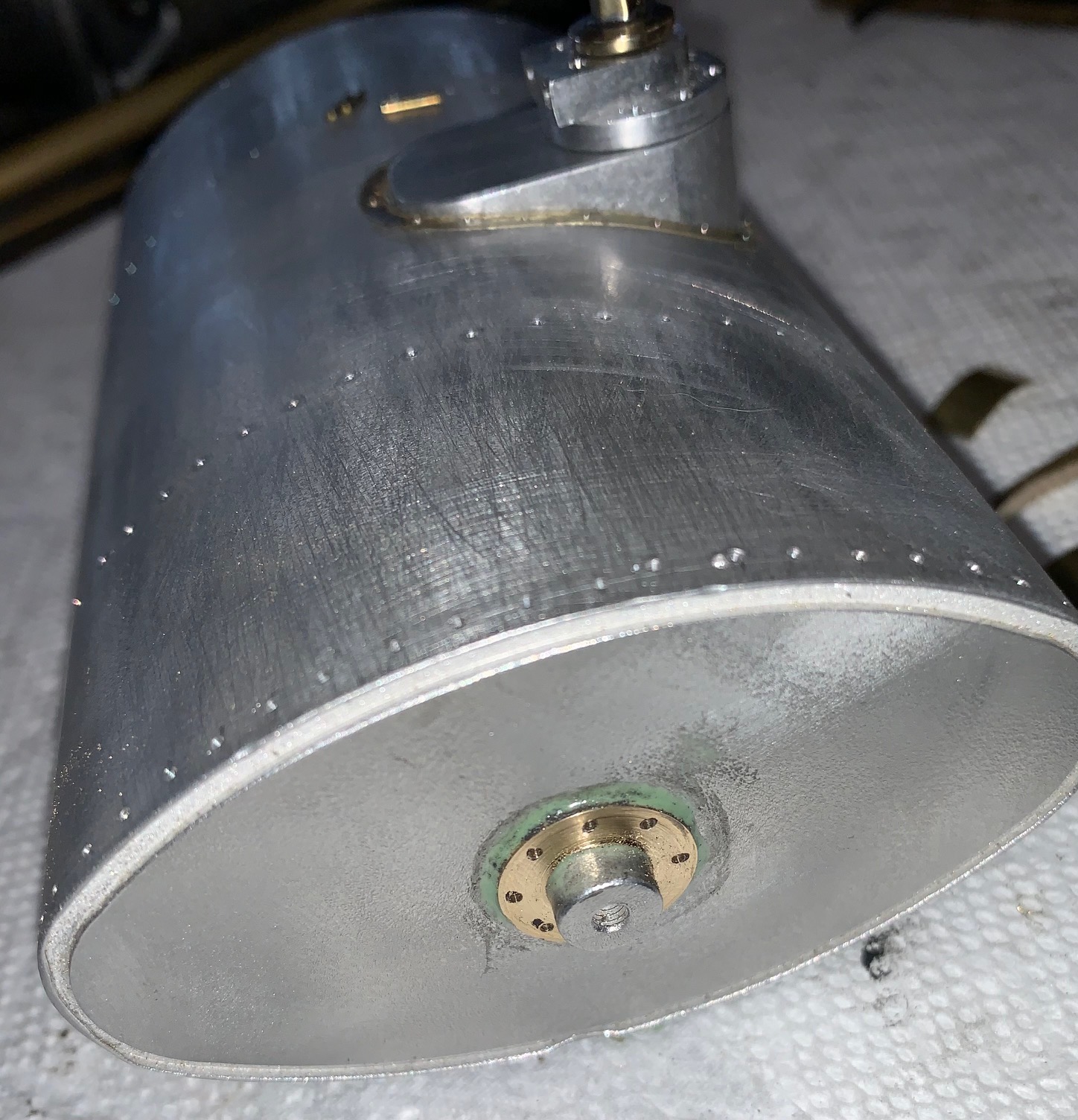 Now I just have to clip off and glue in about 100 1/32nd rivets to get the baffles and edge rivets in place. Then painting will have to be thin layers... or the rivets disappear into the paint!

When last we left our intrepid Silver Ghost... the tank was full of holes.

I spent Christmas week working on a history book I am writing and resisting the urge to work on model. Book has been stalled for some time and I owe the family some time on it. So for Jan and part of Feb, at least, I will probably be not working on chassis. As much as I want to. But I did want to finish the tank. One of the last major components of the chassis. So took 'one tiny teensey weensie little extra day off' to get it done before we wait until March-ish. After much drilling, tons of 1/32 rivets fitted where they belong. I was lazy and didn't rivet the bottom of the tank. As 1/6th creepers are unavailable and 1/6th action figures are not about to report lack of rivets under tank... I decided to just do the visible sections. Which was still a boatload of tiny, infernal rivets. 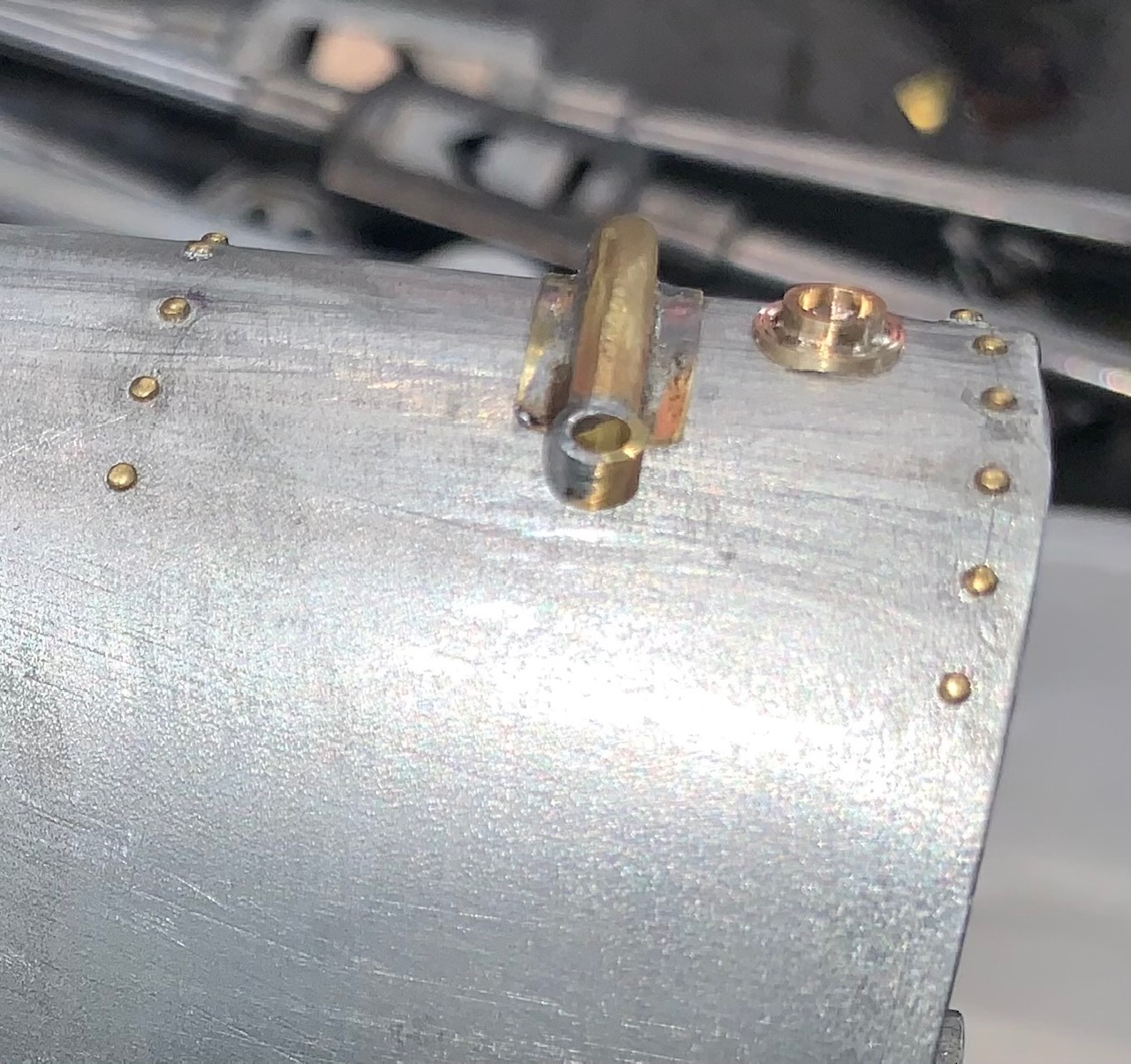 Here you can see my slacking.... but you can also see the tail-light mounts and the related 'wire plug' holder. Back in 1914, only one rear light was required. So RR set up a system whereby the single lamp could be moved from left to right and back, for Continental motoring. You could have two rear lamps. But that cost money. And RR owners didn't get to be RR owners by squandering their money on redundant tail-lights. So you could swap the lamp over easily. These are the brackets and the socket where you screwed in the 'live' tail-light feed wire you weren't using. 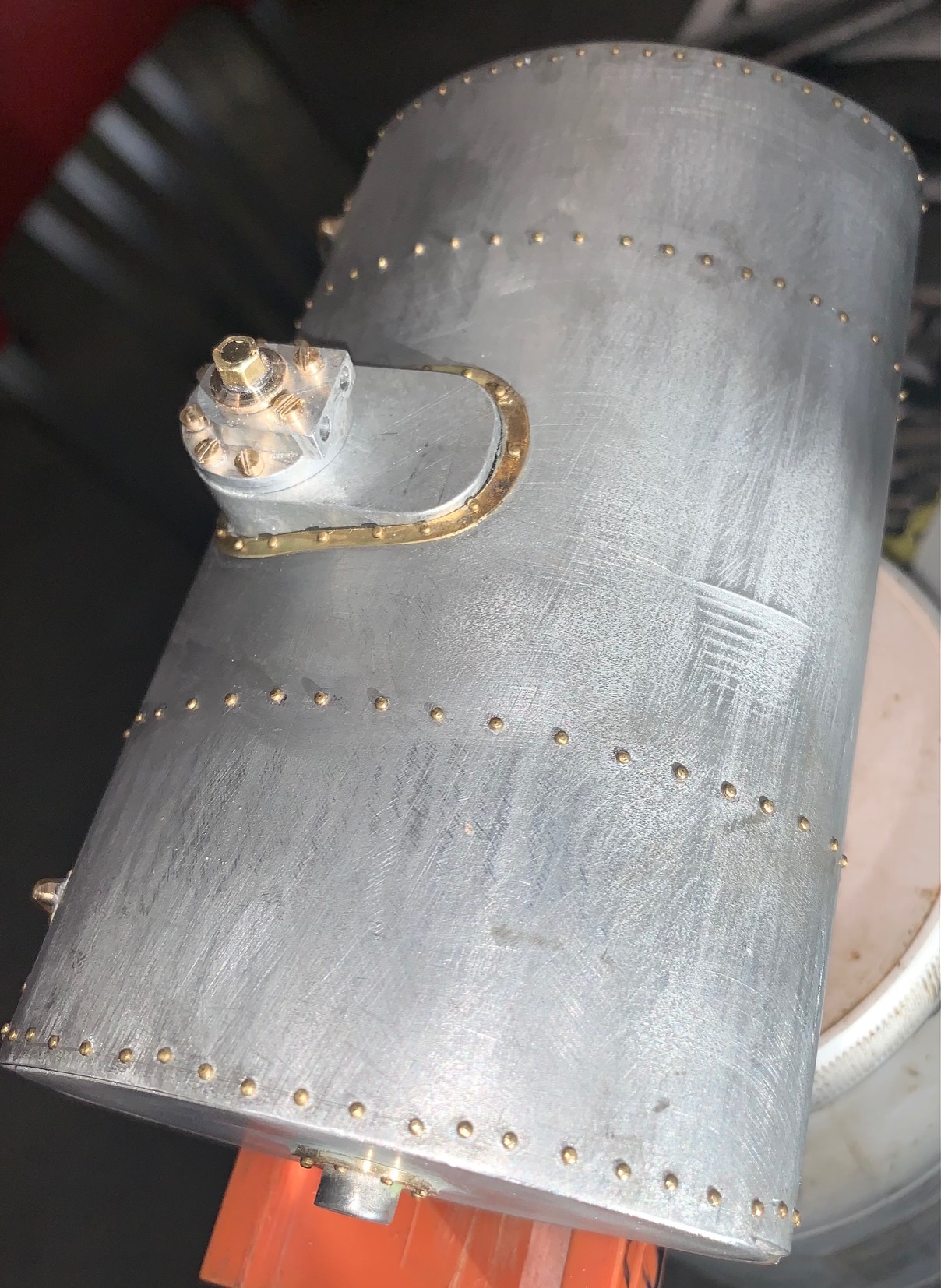 Rivets and the somewhat enhanced filler area. It is accurate with big cheesehead screws holding things down. Fuel was checked, even in 1925, with a dipstick. I will be making one out of ebony or similar interesting wood. I know something as plebian as a gas tank hardly rates this kind of attention. But if I didn't, it would just look like a big obelisk hanging off the back of the chassis, and we could not have that, now, could we? So dozens of holes later and a bunch of machining and it really does look like the fanny of a Ghost. 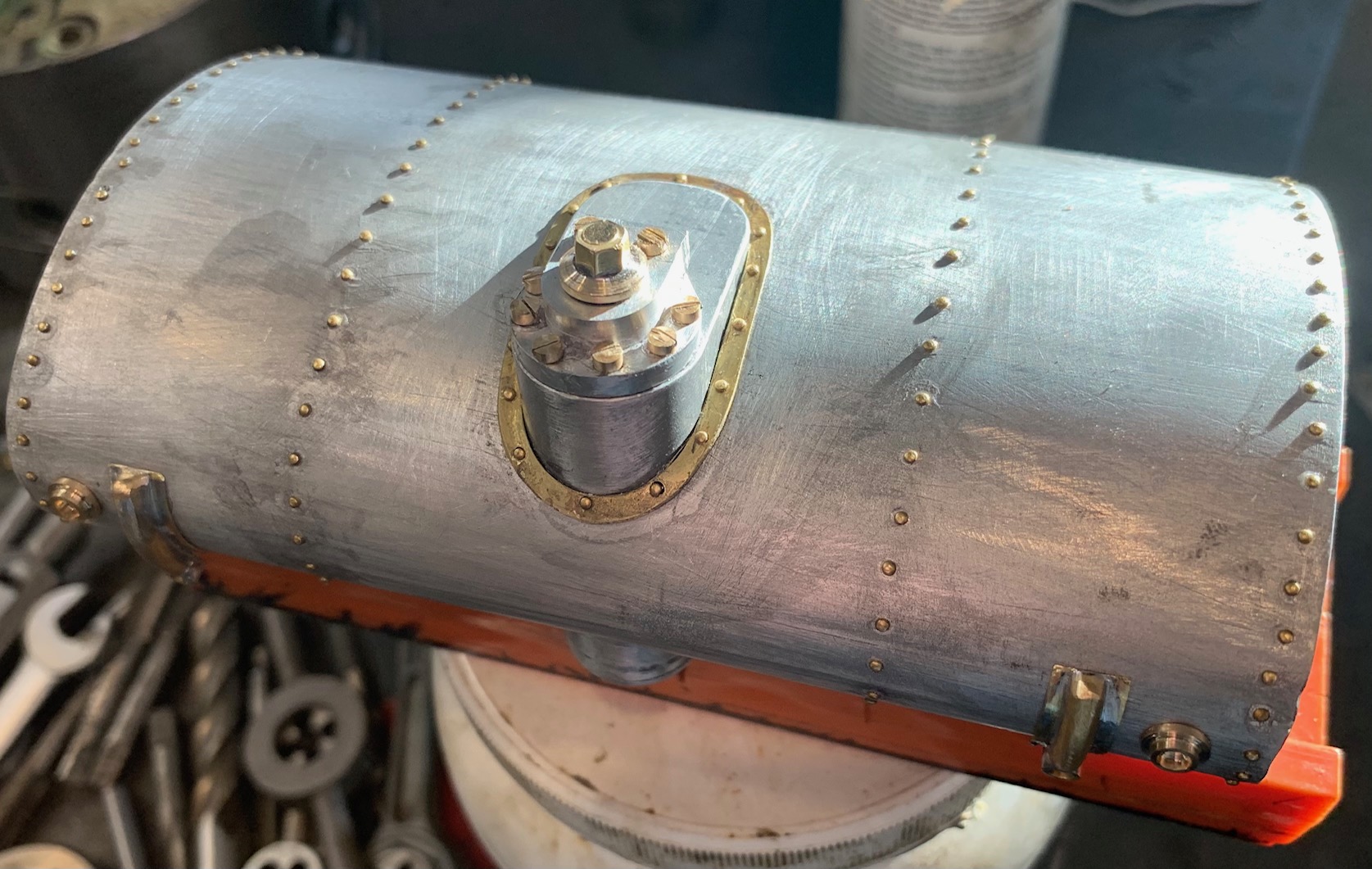 About the same image, but with a bit better focus.

This will get painted black with thin layers of paint so we don't cover up the rivets. At this stage, I am mainly at the point of assembling things and starting to think about paint.

But I have a book to work on for a few weekends or I'll get skinned.