Hi Cristoffer,
Strange, I bought the cylindrical batteries from I-tech and they sent them to Italy, it's been a few years, they have changed the rules,
I put you some links of lifepo4 battery sellers:
https://www.lipotech.net/newstore/
https://www.pingbattery.com/
https://power.tenergy.com/batteries/chemistry/lifepo4/
https://shop.gwl.eu/
the first and the last are definitely in Europe from Lipotech I buy from others not
Marco
Top

I decided to buy this 20ah

Was not sure about the charger though, as the battery description says that the normal lead acid charger could be used.

But now, it's bought and I now that the 2 things fit together
cheers
Steen

I believe most batteries are all made in China, from browsing online I have found two general varieties of lifepo4 that are suitable for the tanks we drive, high dollar hard case units marketed on websites and much cheaper soft case packs on third party sites like Amazon and eBay. The soft packs are smaller too. I went for the later and I’m happy. This 24v 24ah pack fits nicely in my kt battery tray. 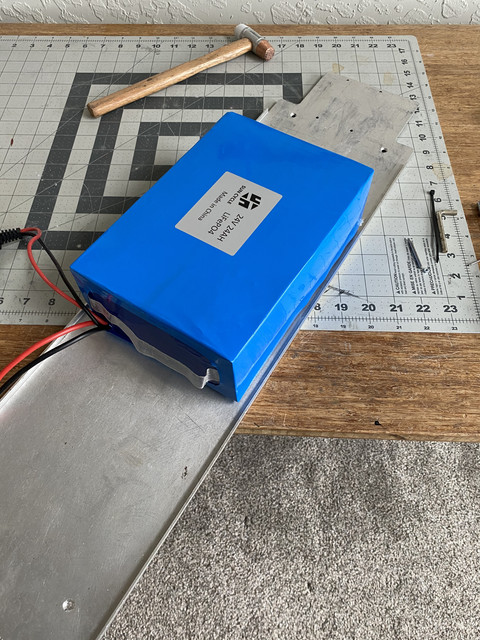 Stephen White wrote: ↑
Thu Feb 25, 2021 12:34 pm
Tim, if you read the latest Knowledge Base Topic on batteries, you’ll see I’ve set out the specs required for Lithium Iron Phosphate. I’d suggest a single 24V array is simpler for charging - it’s not recommended to charge batteries in series. If you do select a two 12V battery option, you’d either need to charge them sequentially or buy two chargers. You can see in the Topic the battery I use, which is UK manufactured but since I bought it in the early days a lot more good options have become available and prices are coming down. The Tracer pack might seem like a high price but it comes with a dedicated charger and integral BMS and is good quality.

I am no electronics or battery wizard but I'm not sure why one can't charge two 12v batteries while connected in series. Is it only if they have an
integral BMS? I ask because the 12 volt battery is a number (4?) of cells connected in series internal to the casing so what would be the difference between charging 4 or 8 cells in series whether or not they are in two physically separate groups?

Not trying to stir up grief just want to know. I have two 36Ah 12volt LiFePo4 packs. I have two chargers capable of charging two batteries at once
so it doesn't really matter to me I just want to clarify. I got the 2 12s vs 1 24 pack as I want the flexibility of using them in different applications.
Even though it isn't the easiest I don't plan on leaving batteries in any of my models when I'm not using them. Safe or not I like my batteries
where I can keep an eye on them...

two LiFe packs with BMS each cannot be charged with ONE 24 V - charger, because the BMS of the pack which is fully charged first will brake the circuit. Using two 12 V chargers should be no problem.

Each of my models has a LiFe pack of its own. I don't like at all to remove a pack from the model because it is deeply integrated. 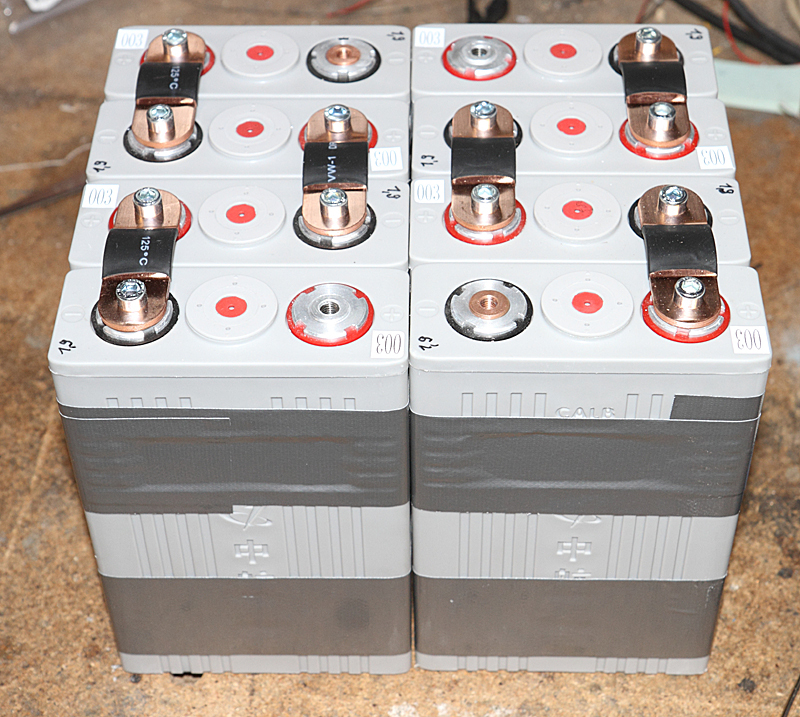 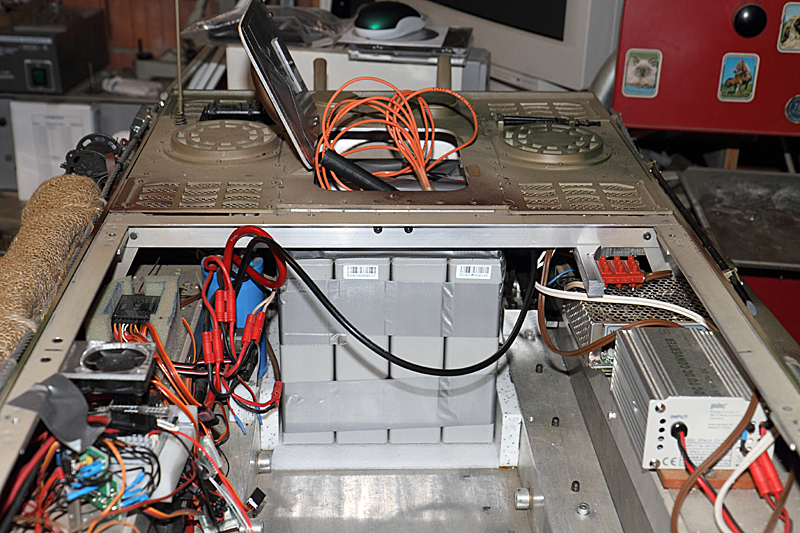 The aim with charging is to apply a current which does not exceed the maximum rate for any individual cell.

LiPos are provided with a balance lead for a reason - they're potentially very dangerous if overcharged. A balance charger will read each cell separately and apply an appropriate charge rate such that all cells are charged to a similar value ie balanced. LiPo should never be charged in series nor without balance. Many of the more capable chargers will offer more than one charging circuit but these are independent of each other, so whilst they can charge more than one battery simultaneously, they're not charging in series.

For batteries without a balance lead, it's more difficult. If series-connected batteries are known to be in the same state of charge, they could be charged in series at the combined voltage. During charging, each battery will receive the same charge current irrespective of the individual battery voltages. Here is the problem and the increased risk. If the batteries are in a different state of charge, the batteries will not be balanced ie there is a risk of exceeding the appropriate charge rate. That will damage the battery and shorten its life. Use of an "intelligent charger" ie one which will cycle through three rates of charge, might appear to overcome this problem but in practice, the charger will not be able to "read" the individual battery state of charge and if there is a a significant difference between batteries, an inappropriate charge rate could be applied. At best, that will shorten the battery life. We've had a number of cases within the Armortek community of premature battery failure and it's likely that series charging was the cause of many of them.

In a typical Armortek model installation, two 12V batteries are connected in series to form a 24V system. It's tempting therefore to charge in series but there is a risk of reducing the already shorter life of a sealed lead acid battery compared with Lithium Iron Phosphate.

LiFePO4 batteries should be protected by BMS (battery management system) so might appear to be safe to charge in series. It’s not recommended however for the following reason.

The battery that first gets to this state will be fully charged while the other battery in series will not be. The remaining battery will be unable to continue charging due to the first battery having gone open circuit.

If LiFePO4 batteries are to be connected in series, charging in series would work in theory with an additional overall BMS which could control the charge to each battery and ensure both BMS’ go open circuit at the same time, preventing any single BMS from completely stopping the charging circuit. I don't know of anyone in our community who has done this (yet?)

It would be better to install a single 24V LiFePO4 battery with a single BMS or alternatively two 12V batteries each with its own charging circuit and charger. That would be equivalent to the balance chargers with multiple ports available for LiPos. A lot of the more reputable LiFePO4 batteries these days come with a dedicated charger included in the price anyway so simultaneous charging isn't an issue.

Gerhard, sorry, you've just said the same thing as I was writing.
Top

Thanks for the replies gents.

I thought the BMS was the concern; thanks for confirming that. I use Graupner Polaron chargers which are reasonably intelligent to manage most of my batteries. Due to the increased capacity of these larger than life battery packs I may need an additional charger or two. So far I've only charged my two LiFePo4 batteries individually. I will continue charging them separately; if it finally seems unworkable to remove the batteries from my models I'll have to make a mechanism to be able to isolate the packs to charge them individually.

I may try the 24v pack Brian mentioned above- that one looks good to me as well.

Still getting used to the realities of these larger models.

Hi Jerry,
you can re-charge any battery individually in any series or parallel configuration as long as the charging current has no alternative path to go.
You do not have to physically remove the batteries from the model.
On Chieftain, Challenger 1 & Chally 2, there was not a facility to recharge each hull battery seperately so if I could tell one was failing, it was always replace all 4.
Mark
Top
Post Reply
25 posts