Use this area for an off topic conversations not related to Armortek or Kompact Kits. Please ensure that you abide by the forum rules.
Forum rules
Post Reply
5 posts • Page 1 of 1

A friend found this picture,
is this maybe for dismantle mines? 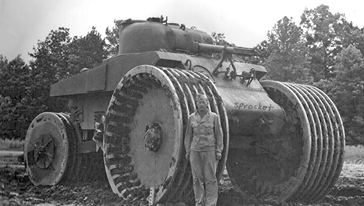 Apparently remote controlled, so a perfect conversion for an Armortek kit.

Thanks for the replay Adrian

Maybe not a good conversion.
According to a book I have written by Peter Chamberlain & Chris Ellis, The T10 was tested but found to be unwieldy and the project was cancelled autumn 1944.
Mark
Top

There are a few images in Fred Crismon's 'US Military Tracked Vehicles' along with a good explanation of the development, and why it failed. Total weight was said to be 124,000 lbs - over 55 tons, which Crismon concludes was too heavy to be practical as a mine exploder vehicle. The original concept vehicle, developed by the National Defense Research Council, was said to be cable-controlled from a following AFV. The initial prototype was built by Fisher Body Div of GM based on an M4A2 hull. (Crismon, pages 375-376).

The T15E1 Mine Resistant Vehicle based on an early M4 Sherman might be a better/more practical RC model alternative.