Armortek owners can buy and sell 1/6 scale accessories and detail parts. note: Armortek does not necessarily endorse these products and can accept no liability for contractual disputes
Post Reply
178 posts

It is quite possible I have purchased a Bone Dome today and once its here will just have to figure out how on earth I am going to get the shape right. If I am able to make one we will release it as a kit. I have also ordered up a number of uniform parts and overalls and am going to have a bash at producing a full set of crew uniforms. Depending on the success of this I will share the "how to"

Following the open day the Commanders Searchlight, sight and GPMG mount are likely candidates for a new kit. We will also be looking at the wiper units for the vision blocks. Clansman aerial bases are all ready available and subject to Mr White getting it done we may have the extinguishers. If he doesn't I may not let him have his overalls and 58 pattern belts

. From further conversations with Stephen we are also going to see if we can come up with a 5 gallon oil drum and suitable decals.

Have you considered a bolt on stillbrew package?
Top

Do not forget the cable and Boiling Vessel, please. And to make it ultra-realistic, replace the normal tap on the BV with a Chieftain fuel tap. The normal tap was a plunger operated one, awkward to use and caused scalded fingers once the seals started to go. The Chieftain fuel tap was a lever operated type and had exactly the same size thread. In my experience 95% of replacement fuel taps that were ordered were fitted to BVs and not to replace faulty ones.
Sleeping bags, compo boxes, cans and salt containers would also be good for any Armorpax Chieftain detailing kit to put in the various bins.
Mark
Top

Do you have any dims for the BV, its a while since I have see one but should actually be quite simple to make. Think cable was braided so may be a little more of a challenge.

Problem with Stillbrew is the sheer size of the castings etc against the likely market, the truth is out of every 100 or so Armortek kits made such as the quad I will be lucky if I sell 10-20 sets, then take out those who would not want stillbew and its just not viable. Items that are fairly low cost to develop are worth the risk and kits such as the Kompact Kit sets where we sell many.

I do not think we will do full vehicle update sets again and will stick to items that have appeal across a wider market.

Not braided but looking at pics probably worth just doing the plugs so people can rig a multicore that can be stowed as you want rather than a fixed casting.

Have sufficient reference pics, just need the dims to make a start if anyone has them.

I have to say that your original post was very well received. Your proposed parts will solve a number of potential problems for many of us, so a big thankyou.

Don’t worry Dave, the extinguishers are on the same schedule as the Larkspur kit.....

Re STiLLBREW, I do have some rather poor external drawings. (I thought I’d posted them but if not, I’ll look them out next week). Shouldn’t be too difficult to replicate. Not for me though, I always thought they spoiled the lines of the turret. We were probably over-impressed with the supposed increase in protection at the time but as I’d seen at first hand what prompted their rather hasty introduction ie T-64B firing 9M112 Kobra, tube launched HEAT missile, I was pretty skeptical. They also made access more difficult.
Top

Does anyone have dimensions of the BV? Fancy having a crack at it tomorrow.

I have bought a batch of US M240's in from China which I am hopeful will take the SF stock and GPMG barrel I already do in the SF kit. May need a bit of tweaking but if it works OK should have a source of GPMG's to go with the upcoming mount. They should work out cheaper than the high prices being asked on EBAY for the few British version GPMG's that show up.

Dave would it be worth your while offering simple electrical boxes, very simple for us to adapt, for one the Chieftain interior, they could also be used for many other vehicle applications. May be a good seller in the long run?
If you made a pre and post war kit of say 6 boxes ( various sizes) with maybe 24 cannon plugs and sockets, bezels and switches they sure would be useful!

You guys out there need to vote with your index finger if you think it's worth Dave's investment...go on hit that like button, i will use tons of the things

I have bought a batch of US M240's in from China which I am hopeful will take the SF stock and GPMG barrel I already do in the SF kit. May need a bit of tweaking but if it works OK should have a source of GPMG's to go with the upcoming mount. They should work out cheaper than the high prices being asked on EBAY for the few British version GPMG's that show up.

Hi Dave
I've think I may have had the version (4D do a M240 kit) you write about from China It's pretty good. I've also got the Dragon version of the M240 too.

The 4D model did come with a ammo box which should paint up nicely.

The main visual differences between the British and US versions are the carrying handle, the length of flash hider and butt mount.

The physical differences are the detail quality which is a little better and a sprung loaded cocking mechanism on the Dragon version.

Of course I haven't seen the version you have brought, so it could be different.

Brass rounds can be brought with metal clips, well worth having (Hard on the fingers to put together though)

Some transfers would be handy for all sorts of places on the tank itself if it's possible.

Starting with the Ammo box please.
Oh Man, I only ride em I don't know what makes them work,
Definatley an Anti-Social type
Top

Yes, its the 4D, my own barrel, carry handle and SF stock replacement should take care of the variations so only going to be using the main receiver assembly. 7.62 ammo box decals we already do.

Still not sure where the master for this is 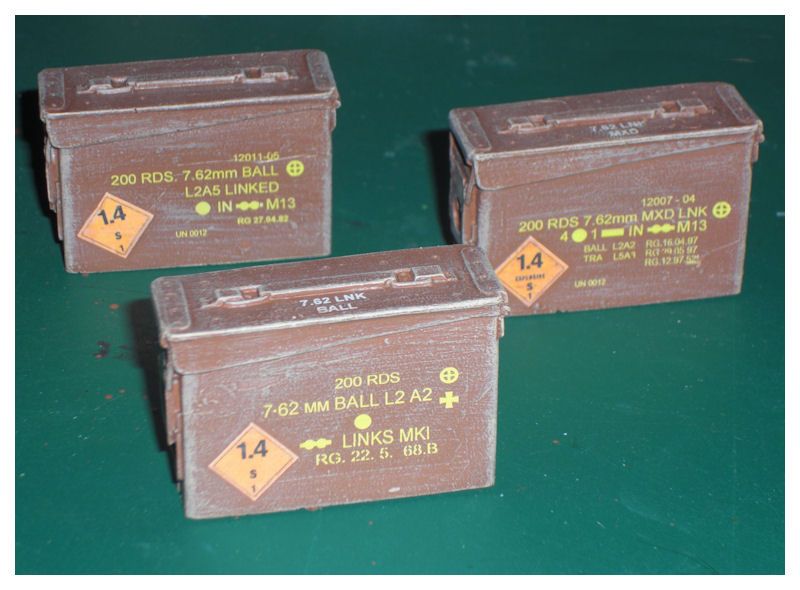