Forum for discussion relating to the Centurion
Post Reply
1008 posts

Next task is to make the retaining strips for the mantlet cover. I used brass strip and 14 BA hex heads. I chopped the strips from sheet using the sheer on my Warco Formit and cut the curved sections by hand. Some silver soldering made up the finished sections.

I'd previously used aluminium strip and 12 BA hex heads around the coax and RMG boss and it looks crude by comparison, so will have to be replaced:

Its funny how you can look at something and say I am happy with that, then a month down the line its, "hmm, its not quite right!" years and years of pleasure to be had with these models.

Thanks Paul, Bob, good to hear from you.

The Vietnamese climate and terrain inevitably required some modification to the Australian Centurions, which had been deployed in their conventional war fit. Amongst the first casualties to the vegetation were the bazooka plates and mult-barrelled smoke grenade dischargers (MBSGD). Within two months of the first deployment in Feb 68, the side plates were gone. After the major engagements around Fire Support Bases CORAL and BALMORAL in June 68, the most iconic of the Australian mods were fitted, the omega brackets on the glacis for the carriage of two spare roadwheels.

The MGSGD continued to trap vegetation and to be damaged or lost. The dischargers themselves were removed locally early on in the deployment. 064 for example can be seen in Jun 69 with the dischargers removed but the mountings still in place. (The damage to this MGSGD mount was the result of blast from an RPG-7 strike during the battle of Binh Ba):

The damage to the mountings from vegetation can be seen here:

In Oct 69, the Australian Task Force HQ requested that they be removed before deploying tanks to theatre but this was refused and the brackets continued to be cut off locally by 106 Field Workshop. This photo shows 064 in 1970, minus dischargers and mountings:

To represent the tank as she was in Oct 69, I opted to make and fit the mountings only:

Fitting is by soldered pegs:

While Allan Bowers in New Zealand has been researching and drawing up the turret bins, I've attacked the tow ropes. The standard tow ropes were 30ft by 1 1/8th in double cables. There has been a lot of discussion in Australia about whether fitting the long range tank required a longer tow rope. I've only ever seen reference to one part number, which suggests there was only ever one type.

The biggest problem in making them is the lack of available commercial bits. The scale wire should be 4.76mm. I was going to resort to the available 4 or 5mm standard wire but found 4.5mm on Amazon. The eyes and link fittings are definitely bespoke and had to be machined.

Hello Stephen, your patience and skills are there for all to see. I really enjoy following this build. There is so much more to these Armortek kits.....for my hard earned cash, years of pleasure and worth every penny

Great to see your latest update, nice work on the tow ropes. Interesting that you have found no evidence of a longer tow rope for the LR tanks. I was sure that I did read a article somewhere on this forum that there were two lengths of rope one being .6 of a metre longer for the LR tanks. I have tried to find it again with no success but I am sure that I have seen a topic on this item somewhere and even if I did find it might not prove that there were two different size ropes.

David, I don't recall that topic but interested if you find it. I base my conclusions on two considerations, firstly that I've never found a second part number relating to a longer tow rope and secondly, no-one has ever found a longer one. I rest my case. If it did exist, it was probably associated with the Cent Bridgelayer, which was the first to have the LR tank. I've approached the Royal Engineers' Museum in Chatham but got no helpful response. Their Cent Bridgelayer has a tow rope fitted and I'd be very interested in the part number on it. Anyone near Chatham?

Mick, many a true word about the pleasures of Armortek kits. I started the Cent thread five years ago to the day and the build has a way to go yet. Five years of pure enjoyment, not bad value. I see these kits as super-models: you can either admire their perfect figure as presented, maybe just add some makeup or be the couturier who dresses them up in the latest and finest fashion.....

I have eventually found the article it is in the craftsmen section under the title of Centurion Tow Cable Set New Product by Mike Standard. (page 3) Hope this of some help.

David, that was sharp to remember the thread. I'd forgotten the discussion. In the event, Mike didn't get sufficient orders to produce. I'd given him a lot of info and pointed him to the discussions in Australia about the possibility of two tow rope patterns. I don't believe he had any other info to support it.

Mike was a great craftsman but he also had a business to run and I suspect he chose to believe there were two sorts in order to supply both Armortek kits out of the box and those who chose to add a long range fuel tank. He didn't need to bother though as the single 30ft rope fits both configurations. RIP Mike, much missed.

Hi Stephen, thanks for the confirmation. The 'other half' said I never remember anything. As I pointed out, I remember the important things in life

Completed tow ropes mounted. I'll delay paint until I've tackled the turret bins. TankFest deadlines approach. The scale thickness wire rope works well. I should have remembered that the front clips on the exhaust boxes were never used - the tow ropes became too hot and would have prevented their use in an emergency.

The turret bins are perhaps the Centurion's most iconic recognition feature. The kit bins are a good representation but when you measure the originals in detail, they're far from simple. Being of British design, there is barely a right angle anywhere, the shapes are subtle and there is absolutely no symmetry. There is a further complicating factor, the kit expended round hatch is not quite in the position of the original and the turret casting is slightly different.

To maintain the character of the originals, CAD is vital. Allan Bowers in New Zealand is an absolute genius with 3D modelling and he's taken dimensions from 064 herself, from Paul Scott in Australia and has modelled them to accommodate the Armortek changes. He's driven through blizzards to measure angles on a Kiwi Cent - thanks Allan.

The process has been for Allan to create a scaled drawing, from which I've made a card maquette, trial fitted it and fed back the results. By being able to constrain some dimensions in the model, we've been able to preserve the character of the originals whilst accommodating the fit on the model. It's surprising with such a wacky design how quickly you lose the character with relatively small changes in some dimensions. In all, we've been through half a dozen iterations to get to a stable design:

After all the design work, fabrication seems relatively straightforward. In Vietnam, the bins got a real hammering, so I've selected very thin .010" thickness brass, to allow some judicious bin bashing to follow:

Assembling the front left bin. The internal reinforcing bars needed a channel section which isn't available from commercial stock. Folding the strip is a bit of a challenge as it won't fit into a press brake. This is the method I use: 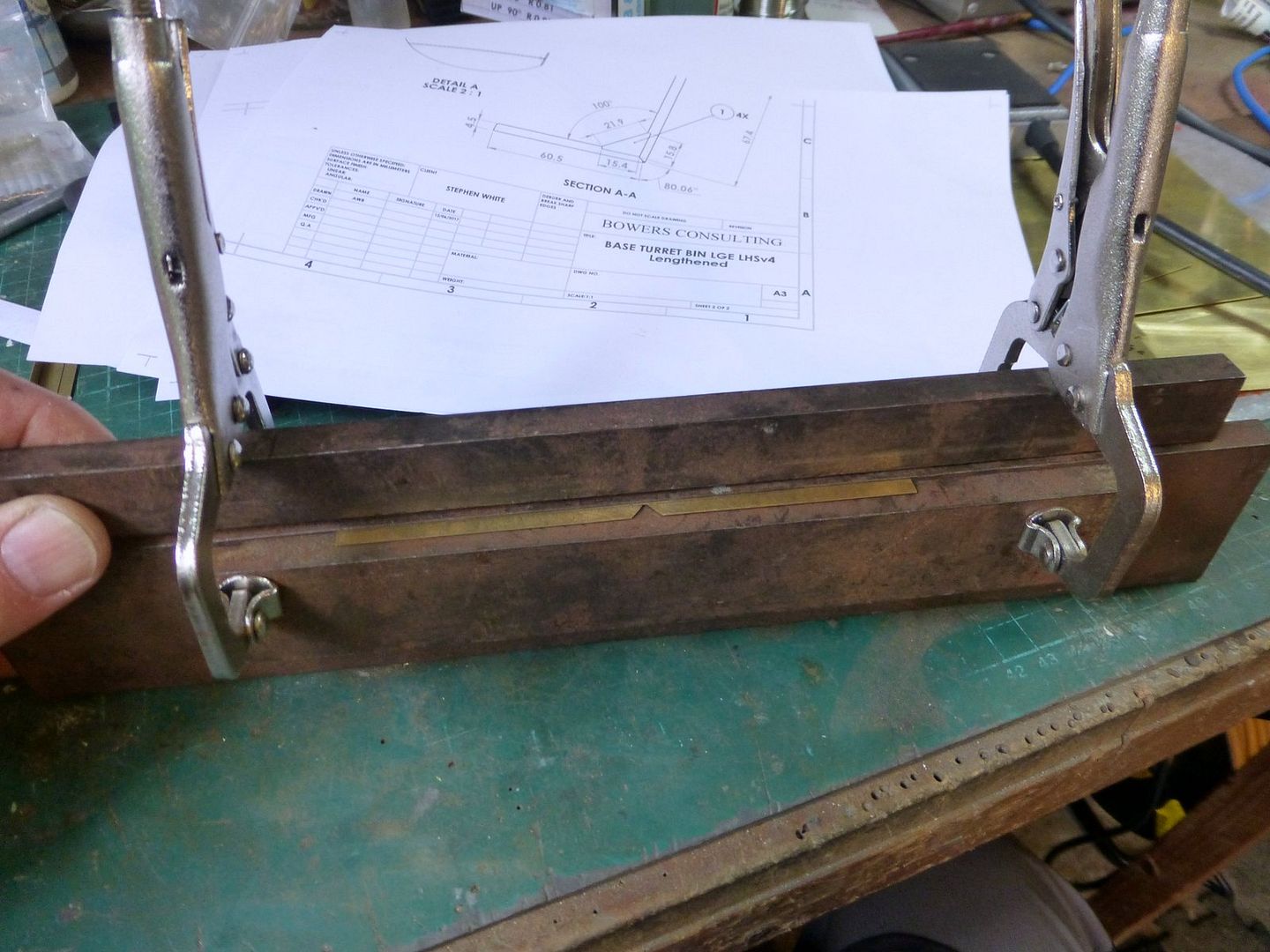 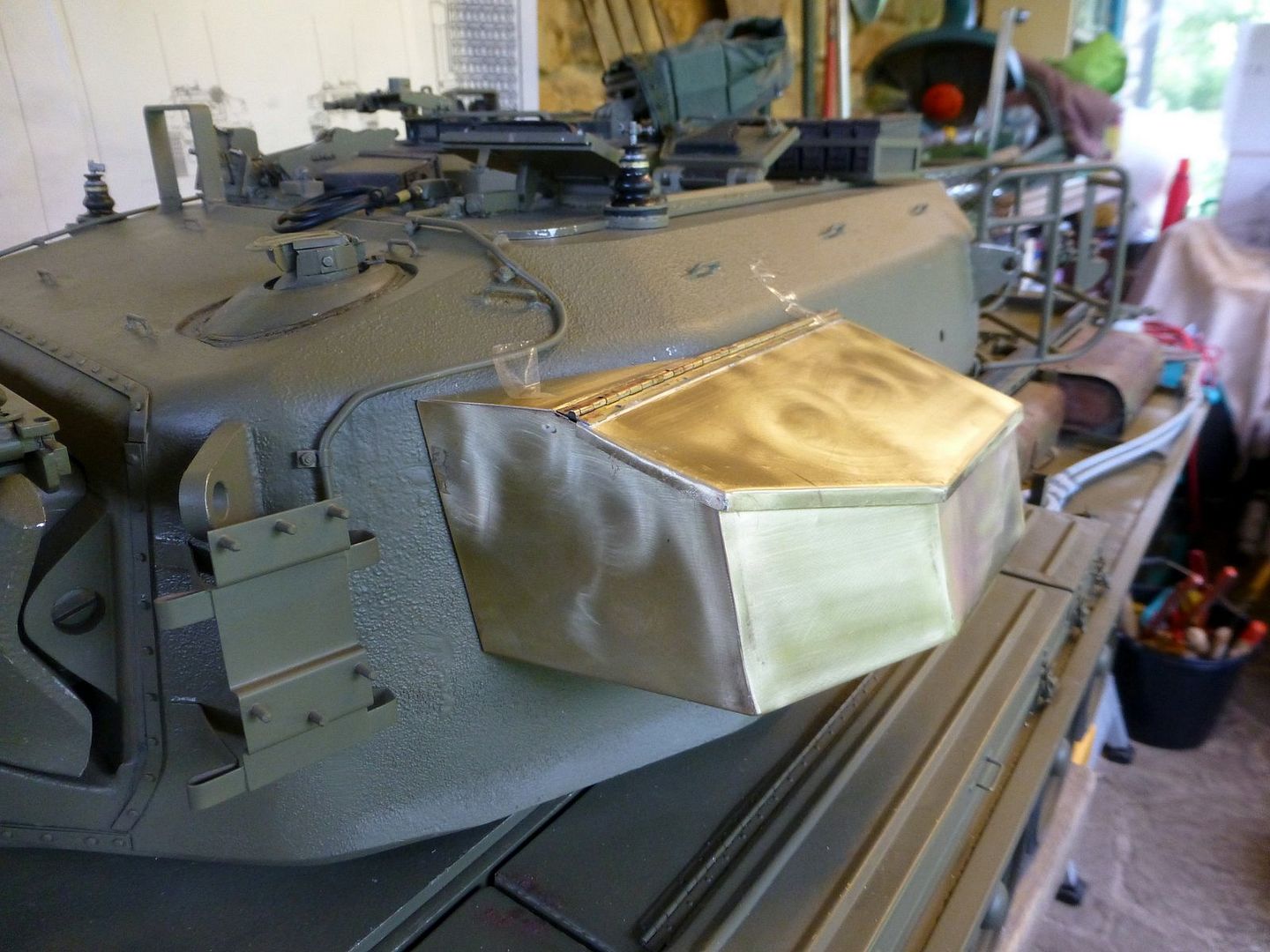 Just some final detailing to do on this one.