Forum for Armortek Owners to Meet, chat and share knowledge. You are advised to check 'official advice' before carrying out any modifications.
Post Reply
20 posts

Hi Mike,
I also wanted a bit more movement out of my Tiger suspension and have done exactly the same as you by swapping the thicker torsion bars to the centre. Also checking that the centre of gravity is in the middle by running the tank over a piece of 2"x2". The final result was an improvement, but you'll never get anything like the rocking movement of a Panther which is just as well as it would look out of place on a Tiger.
One note of caution though:
The original kit set up with the thicker bars at the front and back means that the tank suspension applies most force to the four corners like the legs of a table, so that the tank will always sit level (assuming all swing arms initially set to the same angle).
However if you set all the swing arms to the same angle with the revised bar arrangement, I found that whilst the front would give the required dip down on braking, the weaker bars weren't able to lift it back up again and so the tank stayed in the dipped position - not a good look. Also when the tank is level the weight of the unsupported track was sufficient to lift the front an rear roadwheels off the ground - again not good.
To correct this you will need to increase the initial swing arm set up angle for the smaller diameter bars so that when the tank is sat down normally, the suspension applies roughly equal force through all wheels and will sit level. The weaker bars will still deform more for any given load, so you will still get more rocking movement....just not quite like a Panther.
David
Top

Well, I got it all together today, deck, turret are all on. Again, it started getting HOT (97 degrees) outside and I was getting hungry and THIRSTY so that was it for today. I DID drive it off the cart back on to the motorcycle lift table and I didn't drive it around, that's tomorrow.

One thing I did notice was the front set HIGHER up, not level. When I received the 5.5mm bars, I moved the 5mm (outside) bars to the inside eight holes (four each side). I had to drill the suspension shafts and anchor blocks from 4mm to 5.5mm. Then I used an degree meter to grind the new flats on them and put them on each end.

All I've did with this swap was to work on one side at a time swapping the four middle and four outside ones (and had to move all the anchor blocks). While the hull sat up on the blocks I saw that some swingarms angled lower than others just because of the way the flats were ground. So I put the lower angled 5mms toward each end.

As I said, this is probably something stupid I did but I was curious. I'll take it out tomorrow and really WATCH how it behaves going over the lift edge, in the sand & berms, and IF it has the slightest bit of 'rock' to it (which I doubt). But I DO like how the front is a little more nose UP now instead of nose down.

Thank You So Much for helping me out with your knowledge/experience with this! Mike
Armortek Models: King Tiger, Tiger 1, Panther G, Panzer IV, Sd Kfz 7, Sd Kfz 222, M4A3 Sherman, M3 Lee.
Top

Well, I think that the most important requirement for rocking is a very smooth-running bearing of the swing arms (using needle bearings or so). You can test it putting a bottle of beer or so onto a corner of the hull. When the hull sinks a little AND raises back when the beer is removed then the drive train is smooth enough to rock under any condition.

I wouldn't use light suspesions at the front or rear side because then the front an rear road wheels may be lifted even by adjusting the track links' tension.

Here my Jagdtiger in a braking situation. (Sorry for showing a non-Armortek model). 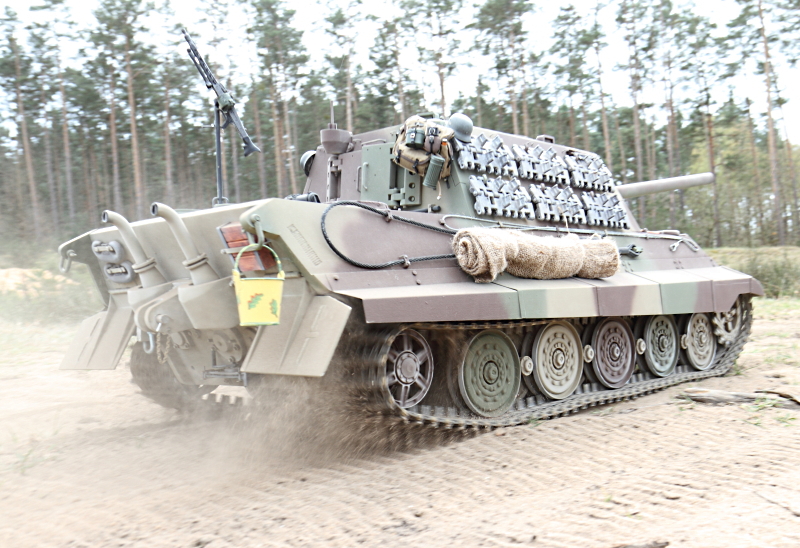 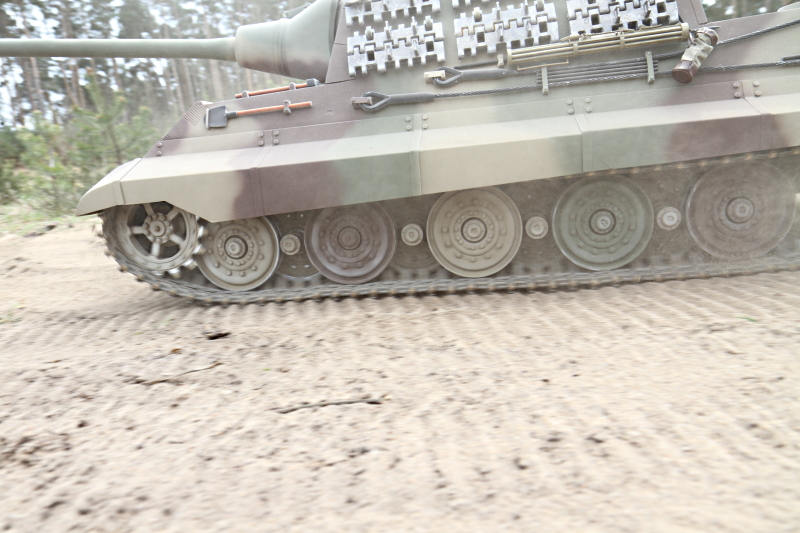 Well, after lots of hard driving, real close watching, bunches of testing, and enormous brane work, I've came to my final conclusion that switching the thicker/thin bars to see if I could get any 'rocking' motion was a total waste of time! This Tiger 1 was made in 2003 so it has the 'old style' torsion bars which aren't very 'adjustable' once the rod flats are ground.

When the bars are in their regular positions, (thick on ends/thin in middle) while driving off the concrete edge of my driveway, then dropping down to the grass, as the front traveled over the edge the front wheels will flex down cause they're stiffer, the middle (5mm) wheels will flex up then down as they travel over the edge and there's more movement of the whole suspension.

When I switched the thick to the middle/thin to F/R, when it travels over anything, the front travels straight out until the stiff middle goes far enough over the edge then the tank just falls forward. There's not much wheel movement so, if anything, it's even MORE like driving a solid brick. And there's still no 'rocking' motion even if I push down, it just slowly goes back to level position.

SO, realizing that THIS was a BONEHEAD idea, it was back up on the cart, turret, deck, batteries, wood floor, motors, etc., all off (again!), and all the suspension returned back to normal. Now that it's back to thick bars on the ends, thin on the inside, this Tiger is HAPPILY back to it's normal suspension movment and everything is right with the world!

Mike,
Thank you so much for taking the time to do this research and telling us all about it, so that we can learn from your experience! It was very interesting reading. I especially liked the part where you describe the new terrain characteristics.

It was not wasted. You did it for us. My deepest bow of gratitude (forehead hits the floor)!
Klotzen, nicht kleckern (Guderian on panzer tactics, but the way I interpret it - it applies to a great many things in life)
Top
Post Reply
20 posts